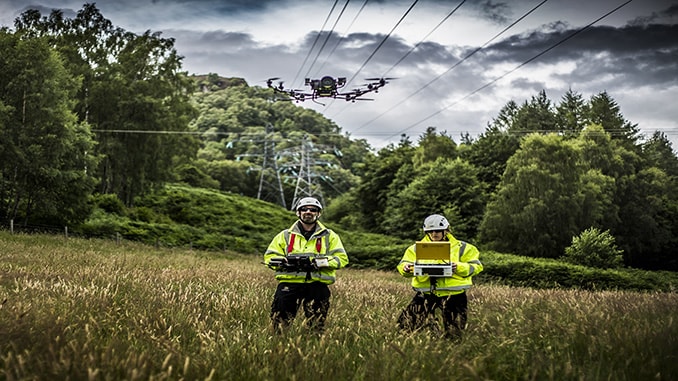 Innovative technology is being used by distribution operator Scottish and Southern Electricity Networks (SSEN) to monitor towers on the 64,000 kilometers of overhead power lines across its central southern England patch; helping to maintain a secure network and keep the power flowing for its 3.1 million customers in the south.

The £420,000 programme in association with Cyberhawk uses drones and iHawk to inspect and visualise SSEN’s 64,261 kilometres of SSEN’s infrastructure from the rural Cotswolds to the urban areas of West London, without intrusion or inconvenience to nearby customers.

With 1,524 towers across SSEN’s central southern England network, the importance of maintaining their structures and subsequently a robust and resilient power supply, the distribution operator has turned to technology to minimise disruption to customers and the environment surrounding the towers, while speeding up to the inspection process.

In addition to this, the reduction in engineers needed to physically climb the towers to assess their condition, means a heightened safety benefit from not working at height and easier compliance with current Government guidelines in relation to social distancing.

This latest contract win for Cyberhawk follows the news that it had secured a contract for the provision of drone (UAV) services with a major California-based utility, which will support it inspect over 50,000 structures. The contract will see Cyberhawk support the utility’s critical wildfire prevention and reliability campaign. The scope of work includes thousands of UAV inspections of lattice steel towers and wood electricity transmission structures that are part of the golden state’s critical electric networks.

Martin Bailey is SSEN’s Maintenance and Inspection Manager and explains more about the benefits of using Cyberhawk technology:

“SSEN’s towers, which support our overhead network, sit across all four regions of our central southern England distribution area and are positioned in various different land types and even air spaces.

“Prior to using the drones, we were required to climb the towers, bringing an element of risk to those involved and taking a great time to safely carry out the assessment. Most of our towers have walk in access so now only two people are required to operate the drone and this in turn results in minimal impact on the environment, and far less inconvenience for land owners and nearby residents.”

Martin continued: “SSEN is a considerate constructor, so looks for ways to reduce disruption, pollution and noise wherever possible and by using drones, we have been able to cut down on teams travelling and have minimised the footfall on sites of special scientific interest, industrial and housing estates and even restricted airspace sites; all while working with heightened security and ensuring the privacy of our customers.”

Cyberhawk’s CEO, Chris Fleming said: “Cyberhawk continues to support SSEN and its drives towards digital transformation and safer working. By using drones we have been able to capture inspection imagery in a systematic way whilst keeping people’s feet firmly on the ground; reducing the need for people to work at height and lessening any potential impact on the environment. We then evaluate the results in our cloud-based asset management software, iHawk allowing SSEN to prioritise repairs efficiently with full visibility.

“SSEN has been quick to understand the benefits and is an early adopter of technology. It’s been fantastic to help SSEN improve its workflows and we look forward to helping bring further technology to their networks.”

Each year, SSEN invests millions of pounds on maintaining and upgrading its electricity infrastructure, proving a resilient supply to homes and businesses across central southern England and future-proofing the network that will enable the UK to meet its ambitious net-zero ambitions.

The Committee on Climate Change (CCC) expects electricity demand to double by 2050 as more and more customers shift to electric vehicles (EV) and heating. SSEN is working to understand the ambitions of the communities it serves, and to enable this transition. SSEN has published Accelerating a Green Recovery setting out ten measures for the Government to ensure no communities are left behind in the transition to net-zero carbon emissions.