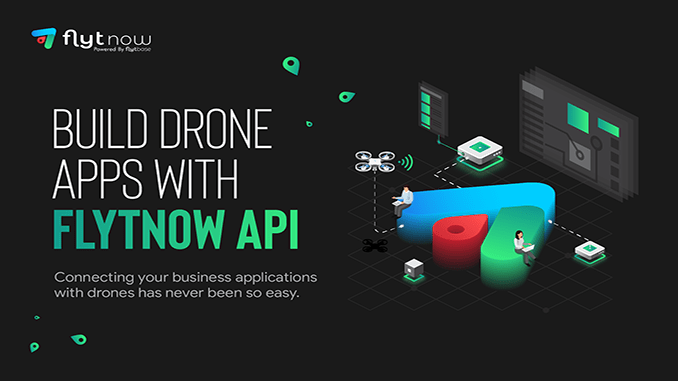 FlytBase, Inc has announced the release of hardware-agnostic cloud-based drone APIs, enabling enterprises to easily integrate drones with their business applications. Drones are rapidly transitioning into fully-
automated commercial tools that are being deployed for a range of applications, e.g., aerial security, delivery, public-safety, inspections, surveys.

With increasing levels of automation, scale, and sophistication of these use-cases, it is often critical to be able to design custom workflows to suit the needs of each organization and use-case. However, building a drone application from scratch is not only expensive and time-consuming, but it also needs deep domain expertise to ensure safety and reliability for the entire solution. FlytNow API has been built to change this.

FlytNow API is a collection of endpoints to help developers quickly integrate drones with other enterprise applications and to create custom workflows to suit business requirements. This is targeted at enterprises looking to deploy fully-automated drones at scale, via integration with sub-systems, powered by a reliable cloud platform.

● Unified and Simple APIs: The endpoints follow the RESTful architecture, which makes the APIs developer-friendly and enables the rapid development of complex applications.
● Easy Implementation: FlytNow API abstracts the drone complexities thus
allowing developers with no prior drone expertise to get started with ease.
● Safe, Reliable, and Secure: FlytNow API automates the handling of several
safety aspects of drones, and is powered by a proven and reliable cloud
platform, enabling developers to deploy safe, secure and reliable drone
applications, faster.
● Virtual Drones: With the help of virtual drones (simulator/test environment), developers can test their drone applications easily without risking expensive hardware.
● Enterprise Scalability: FlytNow API is powered by the FlytNow Cloud Platform, which helps enterprises scale on-demand while following industry standards to ensure security and reliability.

Why Should Developers Use FlytNow API?

FlytNow API takes a technology-first approach to empower developers with:
● A drone specific platform to develop and deploy complex applications a lot faster.
● A platform that ensures the widest hardware compatibility and fleet
scalability.
● A tried and tested platform that is used by over 10,000 users worldwide.
● API endpoints that are secure and follow industry best practices.
● Detailed documentation and priority support.

“Being one of the early startups focused on building a hardware-agnostic drone automation platform, we have had the opportunity to work on a wide range of applications and with a variety of drone hardware. This, coupled with the feedback from thousands of our users, has helped us evolve FlytNow API into the world’s most extensive, reliable and easy-to-use cloud-based drone APIs to power automated commercial drone applications.”

To experience an application built on FlytNow APIs, sign up for a free trial at: https://flytnow.com/pricing/