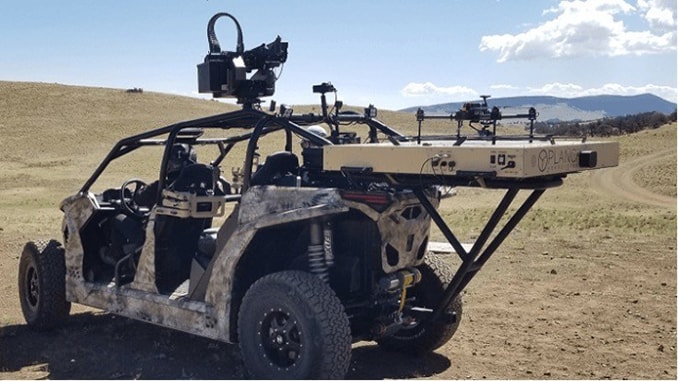 Strategic Elements Ltd (ASX:SOR) subsidiary Stealth Technologies has signed an agreement to collaborate with leading US based Autonomous Drone technology Company, Planck AeroSystems. The Companies will work to enable drones to autonomously launch and land from the Stealth ground based autonomous vehicle platform (AxV).

Stealth Technologies is developing an Autonomous Security Vehicle (ASV) for perimeter security in sectors such as transport, energy, defence, government and utilities providing critical services. The Global Perimeter Security Market is forecast to be growing quickly at CAGR of 12.0% over the forecast period 2020-2026 (reaching USD 282.26 Billion by 2025)[1].

The Stealth and Planck collaboration will focus on enabling the ASV to launch and land drones. This ability would enable the long runtimes of the ASV to be combined with the high speed of drones. Drones could be launched from the ASV at any time whilst on patrol, effectively doubling the ASV’s surveillance coverage capabilities. Drones could also recharge once landed on the ASV and be relaunched. In addition the unique perspectives of both the ASV and its drone can be combined to give an expanded patrol and surveillance dataset, enable more powerful AI use cases for mapping, navigation, object and person recognition, object and person tracking and scene reasoning.

The parties will also assess the potential of integrating mobile tethered drones with the ASV. This will give additional deployment options for drone-equipped ASVs to work at facilities located near to controlled airspaces and at those that have safety requirements that would normally preclude drone operation (e.g. airports, energy facilities). Traditional ground tethered drones can only fly in a single location, however drones tethered from the ASV could be mobile and move with the ASV whilst airborne.

The Company’s priority focus is its exclusive collaboration with giant US Fortune 100 Company Honeywell[2] to build autonomous security vehicles for the correctional justice sector. The parties are working with the WA Department of Justice to build a fully autonomous robotic security vehicle for the Eastern Goldfields Regional Prison in Kalgoorlie to inspect, test and confirm the integrity of the secure perimeter.

The Australian Federal Government has registered Strategic Elements as a Pooled Development Fund with a mandate to back Australian innovation. Strategic Elements operates as a ‘venture builder’ where it generates high risk-high reward ventures and projects from combining teams of leading scientists or innovators in the technology or resources sectors. The Company operates under a Federal Government program setup to encourage investment into innovation. The Company is listed on the ASX under the code “SOR”.