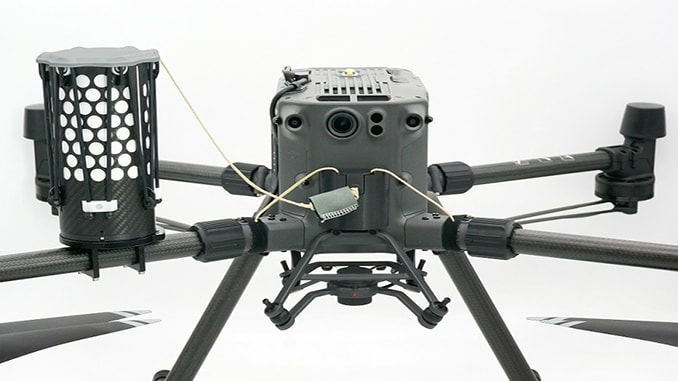 The Matrice 300 is the latest generation of drones for commercial applications from DJI. With a flight time of up to 55 minutes, the latest AI functions and advanced detection and positioning system, the DJI M300 represents one of the most advanced flight systems on the market. By developing the DRS-M300, Drone Rescue Systems has created a further parachute system for this drone, which is available as of now.

“Based on the technical performance of the DJI M300, we expect this flight system to match the success of the other DJI models. So it was obvious to us to develop a parachute system for this new model as well”, reports Andreas Ploier, CEO and co-founder of Drone Rescue Systems GmbH. Similar to the DJI models already established on the market, the DJI M300 enables a wide range of industry-specific applications. “As with other flight systems, the aim here is to protect the drone with the sometimes cost-intensive cameras and sensor systems in the event of a malfunction. We want to ensure that the drone can be safely recaptured even in an emergency, including Beyond Visual Line of Sight (BVLOS). With our parachute system, this is always possible due to the electronics being completely independent of the
flight controller,” says Ploier.

In the development of the new parachute system, attention was also paid to ensuring that the flight time or range as well as the payload capacity is only minimally affected. Nevertheless, the system must provide maximum protection for people and material. For example, the DRS-M300-S1 parachute system weighs 490gr. “We will also launch a smaller system, the DRS-M300-S2, with a total weight of 440g. This parachute system has slightly smaller dimensions because the parachute will be smaller. However,
we expect that most customers will tend to prefer the S1 version because the kinetic energy at impact is even lower than that of the S2 version,” Ploier explains.

As with all other parachute systems from Drone Rescue Systems, the Austrian company decided not to install pyrotechnics or CO2 cartridges as a release mechanism, as this reduced weight. Furthermore the
renouncement of pyrotechnics has a positive effect on the transport possibilities because the parachute system is not subject to safety regulations or dangerous goods regulations. Instead of the usual
pyrotechnics on the market, a robust catapult system ejects the parachute from the carbon tube.

The DRS-M300, like all other parachute systems from Drone Rescue Systems, is subject to the same product philosophy of Ploier and his colleagues: all systems must be completely autonomous, lightweight, reusable and non-pyrotechnically designed. In addition, the systems must release quickly
and reliably. Therefore, the rescue systems are equipped with a quick release mechanism and with a parachute in a cross canopy design, which provides great pendulum and wind stability. Thus, damaged drones can be quickly transferred into a stable sink phase even from a low height, thus reducing the kinetic impact energy. Thanks to the “Mount & Fly” function, installation of the DRS parachute system is simple. By using a bayonet lock, the low-maintenance DRS system can be mounted to a DJI M300 at any
time without great mechanical effort. This means that the system can be mounted within seconds after the drone has been taken out of the case. This creates a reliable connection between the drone and the parachute rescue system, which ensures that the rescue system remains firmly attached to the drone even during unsteady flight or strong vibrations.

About Drone Rescue Systems
Drone Rescue Systems GmbH, awarded by the European Space Agency (ESNC-2016), developed the fastest and most efficient parachute safety solution for drones available on the market right now. The parachute safety solution works autonomously and independent from the drone and ejects the parachute in a fraction of a second, enabling a safe commercial and private drone usage even over crowed places.

The main goals of the Drome Rescue-products are to reduce the risk of harming people on the ground and to bring down the expensive equipment safely when it comes to a malfunction of drones up in the air.