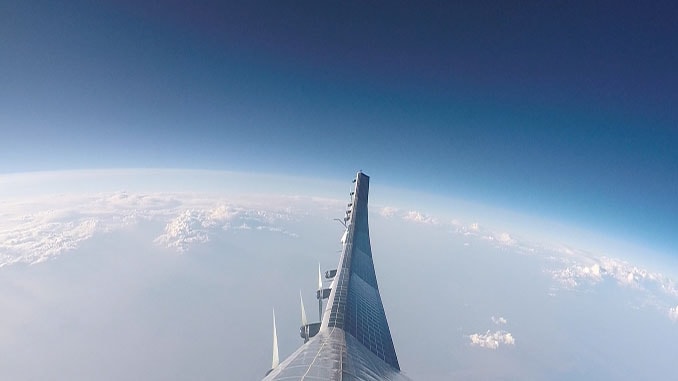 During the test flight, which began at 5:16 a.m. MDT on September 21 and concluded at 1:32 a.m. MDT on September 22, the AeroVironment team piloted Sunglider to a stratospheric altitude of 62,500 feet above Spaceport America in New Mexico. Sunglider successfully achieved major test objectives relating to propulsion, power systems, flight control, navigation and datalink integrity, as well as structural performance during the most turbulent phases of the flight as it entered and exited the jet stream.

The Sunglider, a solar-powered HAPS, has a wingspan of 262 feet and is propelled by 10 electric motors powered by solar panels covering the surface of the wing and rechargeable battery packs, resulting in zero emissions. Flying at an altitude of approximately 65,000 feet above sea level and above the clouds, the Sunglider can carry payloads weighing as much as 150 pounds and is designed for continuous, extended missions of months without landing.

AeroVironment (NASDAQ: AVAV) provides technology solutions at the intersection of robotics, sensors, software analytics and connectivity that deliver more actionable intelligence so you can proceed with certainty. Celebrating 50 years of innovation, AeroVironment is a global leader in unmanned aircraft systems and tactical missile systems, and serves defense, government and commercial customers.

DroneSeed is first in U.S to receive approval from FAA for post-wildfire reforestation in California