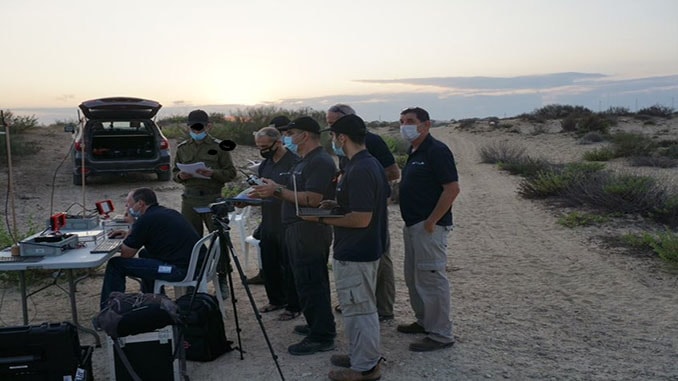 Ciconia Ltd, specializes in midair conflict management systems, achieved a major milestone 1 Oct 2020 in its contract to demonstrate a UTM enabling technology ‘live in Harmony’ concept between a Helicopter and a Drone.

Ciconia demonstrated the safety measures implemented in its pioneering
technology-the C&CAS (Co-ordination and Collision Avoidance System). The
the demonstration was held in an open field obstruction-free zone; a car mounted with the airborne CCAS simulated the helicopter element while a drone was mounted with a light-weight CCAS unit. The CCAS performed very well: provided the right data on time to the pilots of the drone and the helicopter. In cases where the conflict was not resolved, the CCAS took control of the drone and produced accurate steering commands to the helicopter pilot to follow.

Additional CCAS functionality tests were also demonstrated in front of the customer representatives who were very pleased with the results. The results lead the path to the next step – A full Helicopter to Drone trial due to take place later in the coming months.

The enabling technology is built around a unique, complex, near-zero false alarm rate algorithm that has been flight-tested onboard IAF (Israeli Air Force) helicopters in the past. The unique system enables each airborne element to complete its mission with minimal interruption. The technology is designed to enable multiple operators with varying tasks to share the skies with minimal regulatory imposed limitations, leading to safer skies, more efficient operations and upscaled economic benefit.

Ciconia’s CEO Mr. Moshe Cohen: “Ciconia is determined to bring the C&CAS to the market in 2021. The C&CAS answers a major concern that slows the development of the industry: the risk of midair collision where many manned and unmanned aircraft occupy the urban skies. We are very excited towards the next full airborne test milestone”.

Mr. Gil Yannai, Ciconia VP, a former commander of the Israeli Air Force Flight Test Center said: “The C&CAS performed remarkably well, the test verified countless simulations. We are ready for the next stage where the drone will share an airspace with a real helicopter.”