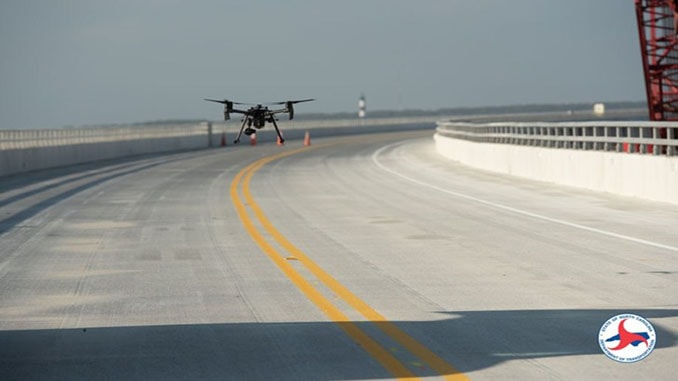 Drones are the N.C. Department of Transportation’s newest tool in maintaining the safety of the state’s bridges and other infrastructure.

The Federal Aviation Administration on Friday approved a waiver that allows NCDOT to operate Unmanned Aircraft Systems beyond visual line of sight while conducting bridge inspections. This approval is part of North Carolina’s participation in the FAA UAS Integration Pilot Program, which is focused on testing and enabling new innovative uses of drone technology.

The announcement makes NCDOT the first state transportation agency to have been awarded such a waiver, paving the way for other states to fully use drones in bridge and infrastructure inspections.

“We are pleased to be leading the way with this fantastic new tool,” said North Carolina’s Secretary of Transportation Eric Boyette. “Safety is our top priority at NCDOT, and this new system will enable us to complete inspections while better protecting our inspectors and the integrity of our bridges.”

The waiver application was developed in part with Skydio, the largest U.S.-based drone maker. Skydio drones are powered by on-board artificial intelligence that enables each craft to avoid obstacles in complex areas that lack a reliable GPS signal, such as the trusses beneath bridges.

Ben Spain, the NCDOT’s UAS program manager, said drones have been used since 2016 to conduct bridge inspections. But by enabling the drones to move beyond the pilot’s line of sight, the inspections will be able to collect more high-resolution images in difficult to see places so inspectors can better analyze the bridge’s integrity and identify possible problems.

“Inspectors will collect images using the drone instead of a snooper truck or having to suspend the inspector from the bridge,” Spain added. “They’ll be able to do these inspections quickly with minimal impacts to the traveling public, like not having to close lanes of traffic for as long.”