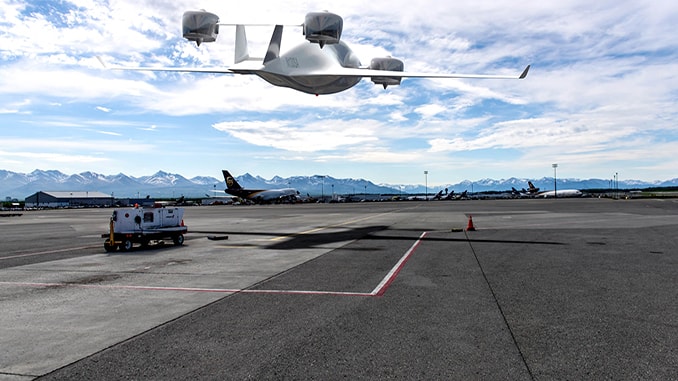 The deal includes an order for 102 Sabrewing “Rhaegal-B” unmanned, heavy-lift, Vertical Take Off Landing (VTOL), cargo aircraft. ADMC will soon begin taking additional aircraft orders throughout the GCC and Africa. The aircraft was recently unveiled to the public during an U.S. Air Force Agility Prime event. The deal between ADMC and Sabrewing also includes establishing aircraft assembly, maintenance, repair, and overhaul (MRO) facilities throughout the Kingdom of Saudi Arabia and Africa to service the Rhaegal-B fleet and will provide technology jobs to the region.

“We are very pleased to have ADMC as our middle-eastern business partner. It’s a perfect fit for Sabrewing and ADMC management in our mutual quest to pioneer unmanned VTOL cargo aircraft development/manufacturing and dominate this market sector by being the first-to-market this extraordinary aircraft,” stated Ed De Reyes, Chairman and CEO of Sabrewing. “As the first commercial purchase of an unmanned aircraft this is really groundbreaking and paving the way for a whole new industry.”

Sabrewing’s “Rhaegal” air vehicle has a turbo-electric drivetrain that is capable of taking off and landing vertically – in mud, snow, ice, deep sand or unimproved landing areas – at speeds of up to 200 knots (370 km/hr), and in weather that is all but impossible for manned aircraft.

“This Agreement brings an emerging-technology, heavy-lift, unmanned cargo capability to the Middle Eastern and the Pan-African marketplace. It also brings advanced technologies in composites manufacturing, drone development and avionic sensor integration to our region,” stated Ayman Zeibak, General Manager of ADMC, “In addition to transporting critical supplies to our most remote regions, high-tech local jobs are being created. This program truly supports the vision for Saudi Arabia’s future,” Zeibak added.

ADMC will soon be tendering new offers for production-line position orders for the high-capacity, heavy lift, unmanned cargo aircraft, secured by deposits, for deliveries beginning in the fall of 2021.

“After performing an in-depth analysis of several heavy-lift cargo drone companies in the United States, Europe and Asia, Sabrewing’s design, without exception, offers tremendous capability and operates at a fraction of the cost of other cargo aircraft,” stated Steven Chikos, ADMC’s Senior Aerospace/Defense Advisor. “Operating expenses are projected to be 50% to 60% less than similar payload capacity manned cargo aircraft. The Sabrewing – ADMC team is poised to bring this aircraft to market years ahead of its competition,” he added.

About Sabrewing Aircraft Company
Sabrewing Aircraft Company is a manufacturer of unmanned heavy-lift commercial cargo air vehicles. The company is the creator of a new generation of heavy-lift, unmanned commercial cargo transport air vehicles that can lift 2 metric tons of cargo, take off and land vertically in austere locations, in any weather, up to 1500 nautical miles away without putting human pilots at risk. Our technologies and products will help grow our customers businesses and transform the way the world ships air-cargo. Headquartered in Camarillo, California, USA, and with offices in Tokyo, Japan, Sabrewing designs and develops cutting-edge technology at its “Dragonworks” Lab in the Silicon Valley to develop the future of unmanned cargo aircraft.