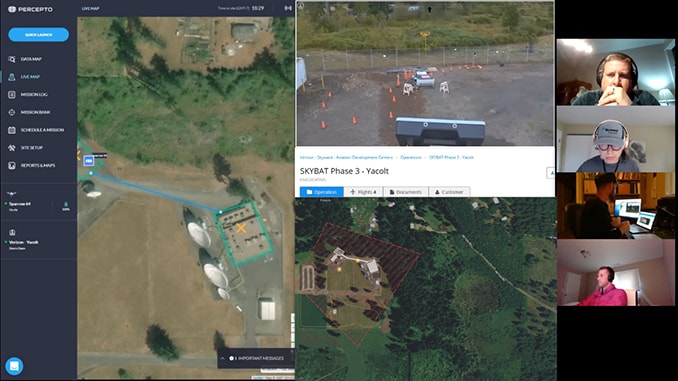 The Federal Aviation Administration (FAA) granted Skyward, A Verizon company, a temporary waiver that allows company pilots to fly the Percepto Sparrow drone from their homes to inspect critical communications infrastructure near the Big Hollow wildfire in Washington. The waiver permits operations 24 hours a day, with less than 3 miles of visibility, and no pilot or observer on site.

With multiple natural disasters occurring throughout the United States, the ability to safely inspect sites that support critical communications for first responders has never been more important or necessary.

“At a moment when we are facing dangerous consequences of climate change and coping with a global pandemic, maintaining the Verizon Network has never been more important,” said Rima Qureshi, Chief Strategy Officer, Verizon. “Innovations in airborne technology have enhanced our ability to inspect our sites without putting engineers in harm’s way, and provide our first responders with reliable communications. We appreciate the FAA’s swift action in granting the waiver, which allows us to deploy a network-connected drone and provide critical services, safely and effectively.”

Although the FAA can grant “beyond visual line of sight,” or BVLOS, waivers to businesses that prove they can fly safely, an onsite pilot or visual observer has still been generally required. In preparation for crises such as this, Skyward spent nearly a year testing and proving it could safely fly without onsite personnel. In addition to the groundbreaking nature of the flight, the waiver itself is a milestone for remote deployment of drones in the U.S.

“We’ve built a BVLOS capability consisting of a remotely deployable drone system, weather monitoring systems like those used at airports, Skyward’s Aviation Management Platform, and state-of-the-art airborne safety systems that allow us to check the surrounding airspace for other aircraft,” said Skyward’s Director of Aviation Development Centers whose name is X. “Verizon’s 4G LTE network connected these systems, giving the team’s operations lead in Alaska a near real-time picture of the operation from 1,600 miles away.”

The waiver was granted through the FAA’s expedited Special Governmental Interest process. The waiver applies to drone support operations for critical infrastructure that maintain communications for emergency responders and extends until Friday, Sept. 25.

Since September 9, the Big Hollow Fire has burned more than 24,000 acres and caused mandatory evacuation orders in the area. The location of the critical communications infrastructure itself is within blocks of a Level 1 evacuation order and the air quality was unsafe for humans. This operation not only allowed Verizon engineers to confirm the integrity and operability of its infrastructure was not impacted, it also allowed them to do so without putting people in harm’s way.

Verizon continues to closely monitor dozens of wildfires burning in the western US and our network is currently performing well with no significant impacts to date.

Verizon Communications Inc. (NYSE, Nasdaq: VZ) was formed on June 30, 2000 and is celebrating its 20th year as one of the world’s leading providers of technology, communications, information and entertainment products and services. Headquartered in New York City and with a presence around the world, Verizon generated revenues of $131.9 billion in 2019. The company offers data, video and voice services and solutions on its award winning networks and platforms, delivering on customers’ demand for mobility, reliable network connectivity, security and control.