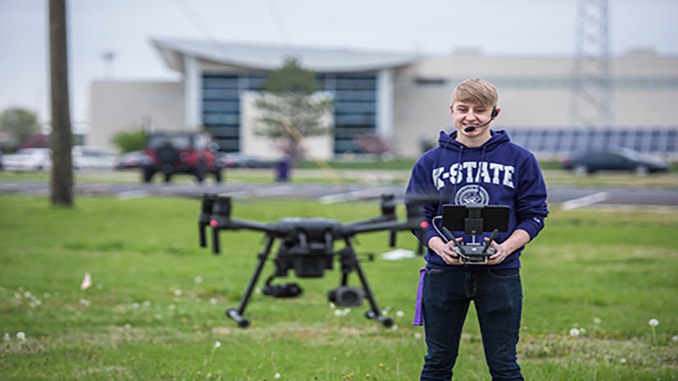 “We value our FAA relationships,” said Kurt Carraway, UAS department head at Kansas State Polytechnic. “As soon as we became aware of the FAA’s initiative to establish a UAS-CTI, we knew we wanted to be a part of the program.”

The FAA’s UAS-CTI recognizes institutions that prepare students for careers in unmanned aircraft systems, commonly referred to as drones. To qualify for the initiative, schools must offer a bachelor’s or associate degree in UAS or a degree with a minor concentration or a certificate in UAS. Schools must provide curriculum covering various aspects of UAS training, including hands-on flight practice, maintenance, uses, applications, privacy concerns, safety and federal policies concerning UAS.

“The UAS-CTI is a win-win for leaders in UAS education, the FAA and ultimately the industry we serve,” Carraway said. “We look forward to this collaboration to help advance UAS training and education across the nation.”

K-State Polytechnic has a reputation as a leader and innovator in the UAS industry, evidenced by a series of firsts with the FAA: the first university to offer beyond visual line of sight training to students; the first entity in the nation to receive statewide flying access; a member of the first FAA Center of Excellence for Unmanned Aircraft Systems and the first entity in the country approved for commercial flight training.

To learn more about the UAS flight and operations program at K-State Polytechnic Campus, contact the admissions office at 785-826-2640 or polytechnic@k-state.edu.