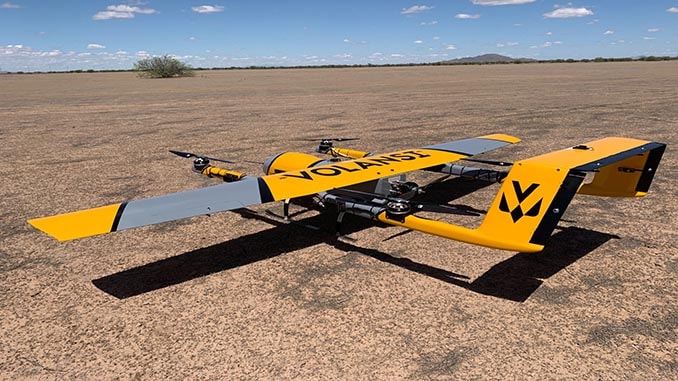 Volansi, Inc. , the leader in vertical take-off and landing (VTOL) middle-mile drone delivery services, today announced that it has closed $50 million in a Series B round of funding. Led by Icon Ventures, other participants in this financing

include existing investors Lightspeed Venture Partners and YCombinator as well as new investors Harpoon Ventures and Merck Global Health Innovation Fund. In addition to the company’s funding, Volansi also announced Joe Horowitz, managing partner of Icon, and Barry Eggers, founding partner of Lightspeed, will join its Board of Directors.

Volansi provides automated point-to-point drone delivery services for time-critical parts and urgent medical supplies for enterprise customers and the U.S. Department of Defense. This new funding will allow Volansi to build on current momentum by expanding its team, launching new projects and scaling current initiatives in both emerging markets and in the US.

“The combination of our best in class cargo drones and unique software platform set us apart from others in the industry,” said Hannan Parvizian, CEO and Co-Founder of Volansi. “Closing our Series B with such high-quality investors, especially during these challenging times, is further testament to the venture capital community’s confidence in our business and will allow us to keep pushing the envelope of mobility and robotics.”

“The drone market is very crowded with all sorts of players, but after getting to know Hannan and his team and doing an extensive amount of due diligence, especially with Volansi’s key customers and distribution partners, it became abundantly clear that the company is well-positioned to rapidly build a huge business,” said Joe Horowitz of Icon. “We are particularly excited about Volansi’s unique ability to address the medical community with urgent vaccine delivery, particularly in looking ahead to a post-COVID world.”

With $25 million of prior capital provided by Lightspeed and other investors, Volansi developed and brought to market first-of-their-kind autonomous drones, including the VOLY M20 and VOLY C10. The VOLY C10, the workhorse of Volansi’s UAV fleet, carries up to 10-pounds of cargo over 50 miles. The aircraft has already performed operations in Africa, the Caribbean, and the US. The VOLY M20, is a dual role aircraft with the ability to simultaneously carry up to 20-pounds of cargo in addition to 10-pounds of sensor payloads. It has a 350-mile range, a cruising speed of 75 mph, and more than eight hours of endurance for sensor operations.

“The Volansi team has made significant progress since Lightspeed led the company’s Series A back in 2019,” said Barry Eggers, founding partner of Lightspeed. “We’ve been impressed by the leadership and team’s ability to innovate and execute, and we are looking forward to deepening our partnership during this next phase of growth.”

Volansi provides fast, on-demand aerial delivery services for time-critical shipments over long ranges. We build and operate long-range, heavy-payload drones for commercial, defense, and humanitarian applications. Leveraging drone technology as a transportation method, we help our customers gain control of their supply chain by delivering critical equipment (and aid) where it otherwise faced unpredictable delays– helping to save time, money, and lives. To learn more, visit volansi.com or follow us on Twitter ( twitter.com/volans_i ).

Lightspeed Venture Partners is a multi-stage venture capital firm focused on accelerating disruptive innovations and trends in the Enterprise and Consumer sectors. Over the past two decades, the Lightspeed team has backed hundreds of entrepreneurs and helped build more than 400+ companies globally, including Snap, Nest, Nutanix, AppDynamics, MuleSoft, OYO, Guardant, StitchFix, and GrubHub. Lightspeed and its affiliates currently manage $10.5B across the global Lightspeed platform, with investment professionals and advisors in Silicon Valley, Israel, India, China, Southeast Asia, and Europe. www.lsvp.com