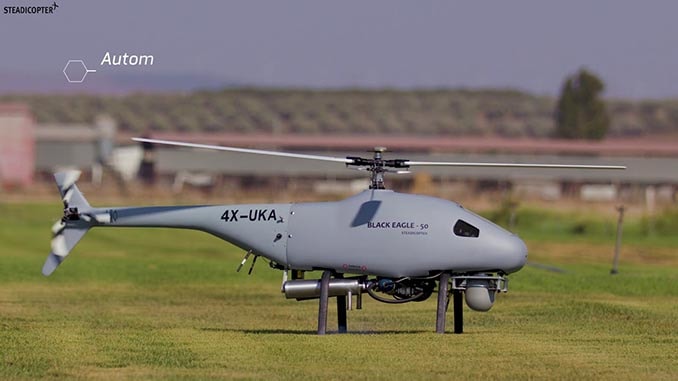 The coronavirus pandemic spurred focus on these new products, according to Noam Lidor, director of sales and marketing for Steadicopter. With the spread of COVID-19 slowing the global economy, the company found the time to review recent customer requests to develop a system more suitable for local and tactical missions. That resulted in providing the two new electric drones, which can be used for covert missions that require a quieter engine, or for maritime surveillance of facilities such as offshore gas platforms.

The Black Eagle 25E weighs 18 kilograms and can carry a payload that increases its maximum weight to 25 kilograms. The 50 and 50E drones can weigh up to 35 kilograms, with the 50 weighing 27 kilograms and the 50E weighing a bit less due to the electric engine. With the lighter engine, the 50E can carry 10 kilograms of payload.

Steadicopter is based in northern Israel and was founded in 2005. Like many Israeli companies that sell defense or security products, Steadicopter doesn’t name customers. The Black Eagle 50 was shown at the Singapore Airshow in February 2020, DSEI in London in 2019 and Eurosatory in 2018.