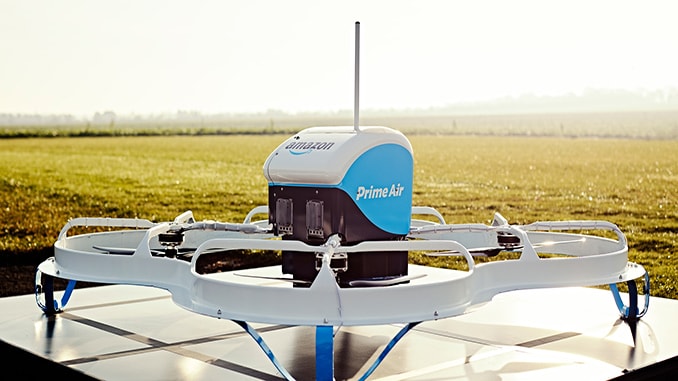 The designation allows Amazon to begin commercial drone deliveries in the U.S. under a trial program that lets small delivery drones fly beyond visual line of sight. It’s not clear where and when they will begin.

“This certification is an important step forward for Prime Air and indicates the FAA’s confidence in Amazon’s operating and safety procedures for an autonomous drone delivery service that will one day deliver packages to our customers around the world,” Amazon Prime Air VP David Carbon said in a statement. “We will continue to develop and refine our technology to fully integrate delivery drones into the airspace, and work closely with the FAA and other regulators around the world to realize our vision of 30 minute delivery.”

Other companies including Alphabet and UPS are developing their own drone delivery systems and have similar FAA approval. Alphabet’s Wing arm has increased its drone-powered deliveries amid the pandemic.

Bloomberg reported that “routine deliveries are most likely still years off” for Amazon due to additional regulatory hurdles.

Here’s a full statement from the FAA:

The FAA’s role is to ensure that any UAS operation is performed safely. The FAA supports innovation that is beneficial to the public, especially during a health or weather-related crisis.

Amazon showed off its latest drone design in June 2019: a fully-electric drone that can fly up to 15 miles and deliver packages under five pounds in less than 30 minutes.

Amazon’s drone efforts date back to 2013 when Amazon CEO Jeff Bezos revealed plans for delivery drones on 60 Minutes. But seven years later the company has yet to officially launch a widespread commercial delivery drone service, only doing small tests in the meantime.

Business Insider reported in June that Amazon was gearing up to launch Prime Air in limited trials this month after long delays, internal conflict, and regulatory holdups.