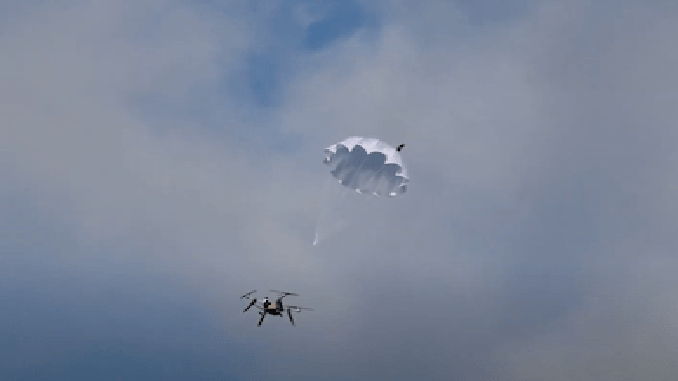 Percepto, the global market leader for autonomous industrial drone solutions, today announced that its on-site autonomous drone, the Percepto Sparrow, is the first on the market to offer an ASTM 3322-18 standard compliant integral parachute after completing more than 50 successful test flights. The achievement builds upon the drone’s existing safety features. You can see footage of the parachute in action here.

The parachute feature is compliant with FAA standards and will expedite further the approvals for flying over people and beyond the visual line of sight (BVLoS) for Percepto’s Fortune 500 customers.  FPL is the first utility in the US to gain a BVLoS approval, and Percepto’s customers were also the first to gain BVLOS  approvals for autonomous drones in industrial sites in Italy, Spain, Portugal, and Israel.

“ASTM compliance for the Percepto Sparrow parachute marks the pinnacle of its sophisticated safety features, further underlining its popularity as the most widely deployed drone-in-a-box on the market. Our customers operating major energy, mining and industrial sites can utilize the drone for critical missions knowing that their employees and infrastructure are safe even in the most challenging weather conditions.” Raviv Raz, Chief Engineering Officer and Co-Founder.

Percepto’s parachute complements existing software and hardware designed for the utmost safety. The parachute has an integrated and independent power source, allowing it to reliably launch in all possible failure scenarios where loss of control might occur. This includes battery failure, motor failure, or any other unexpected malfunction.

The parachute adds another all-weather feature to the drone in a box solution which recently passed level 5 hurricane testing at the Florida International University Wall of Wind. The Percepto solution is the most safe and ruggedized autonomous drone solution on the market for all weather conditions, able to perform critical tasks and land in high winds, snow, dust, rain and extremely high and low temperatures

Percepto is a leading provider of autonomous drone-in-a-box solutions for monitoring and securing critical infrastructure and industrial sites. Our advanced, AI-based software provides real-time insights, aiding our customers to assess risk, minimize downtime, drive efficiency and reduce operational costs without human intervention. Tested in all weather conditions, it is the most rugged platform available today.

Percepto is the most deployed drone-in-a-box solution in the market with Fortune 500 customers in more than 10 countries.