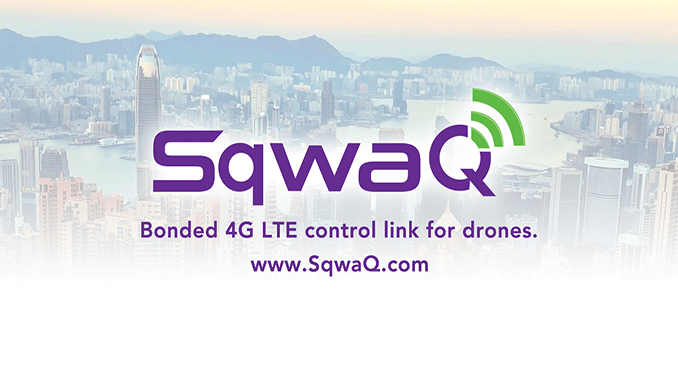 SqwaQ, a leader in communications technology for robotics, autonomy and aviation, revealed today that it has successfully demonstrated its patented airborne LTE drone communications technology for multiple partners. The technology enables drones, helicopters, air taxis and other connected aircraft to share the same airspace rather than being segregated. This eliminates the need for UTM (Unmanned Traffic Management) restrictions and resolves other obstacles that have been delaying wide-scale, routine UAS integration into the airspace. Rather than segregating or restricting drones, SqwaQ enables safe, unfettered integration into controlled airspace while also resolving Remote Aircraft ID, Pilot Credential Verification, Flight Path Management and other challenges that have limited UAS operations.

Easily integrated or retrofit into commercial UAS, the SqwaQboard is a compact, 3”x6”x1” communication module weighing only 270 grams that aggregates six 3G/4G LTE connections into one, multi-redundant data pipe to broadcast four pilot view and downward cameras or sensors simultaneously, plus multi-redundant command and control (C2) and headroom for an array of avionics like Mode-S transponder, ADS-B in/out and VHF radio. These and more capabilities are already patented or patent pending.

The SqwaQboard leverages the redundancy of communicating with multiple networks and towers simultaneously for more robust, redundant performance. Built to conventional AS9100 and DO-160 aviation safety standards, it is the first and only carrier approved device authorized for Airborne LTE Operations. The company worked with regulators and cellular network owners for over 2 years just to gain that access. As a result, SqwaQ can provision customized bandwidth services on 600 cellular networks across 130 countries and provide affordable roaming across entire regions like North America or the entire EU. This gives the customer a seamless experience because SqwaQ provides the hardware, data services and warranty support on both, eliminating any finger pointing if a problem arrises. It also means users can fly across wide spanning regions without losing connectivity because the six modules can roam across dozens of cellular networks simultaneously.

SqwaQ can enable a remote pilot in New York to fly a properly equipped unmanned aircraft through controlled airspace in Los Angeles with the experience of actually sitting in the cockpit. Multiple pilot view cameras can be supported to stream live, 360 degree views around the aircraft as well as the normal downward cameras or sensors. Nationwide command and control has less than 1/2 second latency round trip. The remote pilot could even talk to air traffic control via an onboard VHF radio just like manned aircraft, enter the traffic pattern, Ident with Mode-S or ADS-B transponder as directed, and then land at LAX airport per ATC approval. To air traffic control, the experience would ‘feel’ like any other manned aircraft routinely handled. The entire experience could also be automated so ATC can remain alert to thousands of active drone flights at any moment without the burden of managing them unless they want to use airport facilities. Gradually, that function could be automated and extend to manned aircraft as well, so air traffic controllers could manage 4-10 times the number of aircraft they handle today.

“Autonomy and industrial IoT require robust, redundant communications. SqwaQ is delivering today what 5G still won’t do in ten years. We have prominent partners working under NDA to liberate drones and fly unfettered in the airspace. That won’t happen with the plastic Chinese toy drones so commonly sold today of course. We’re excited to have major stakeholders in multiple countries pursuing this with us,” said Ted Lindsley, CEO.

About SqwaQ
SqwaQ is an SD-WAN and MVNO service provider focused on high-value mobile, Industrial IoT applications that demand reliable multi-redundant connectivity. Verticals include aviation, telemedicine, ground robotics, autonomous vehicles, oil and gas, and commercial construction. Founded in 2018, the company has more than a dozen patents issued or pending and wholesale bandwidth agreements with major cellular networks to provision custom data services on over 600 cellular networks across 130 countries.