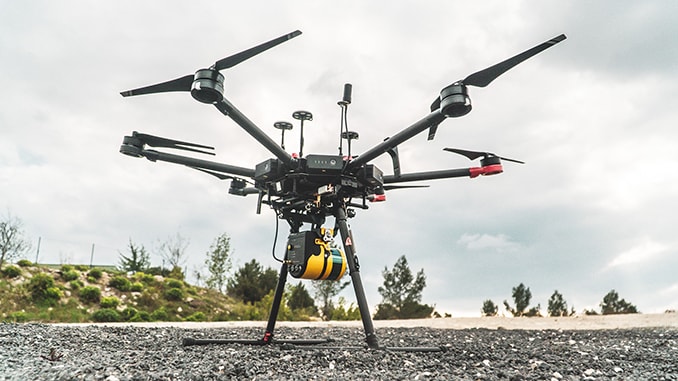 The YellowScan Surveyor Ultra is a high density and long range mapping solution equipped with a Velodyne Ultra Puck™ sensor and ideally suited for high speed unmanned aerial vehicles (UAV), such as VTOL and helicopter drones. The YellowScan Surveyor is the company’s lightest system – at 1.6 kg including the battery – and uses a Velodyne Puck™ sensor. It is YellowScan’s most versatile UAV solution and is built for urban surveys subject to strict flying regulations that require extra lightweight payloads.

Both YellowScan systems feature new designs that include an aluminum frame to provide a stronger system structure and better heat dissipation. They are Fly & Drive ready, able to be rapidly deployed on road vehicles as well as on any type of UAV. A system swap between car and UAV can take less than five minutes. Other new features include a three-color LED that provides users with more status information and the .t04 file is pushed directly to a memory stick, which means users no longer need a network connection to download the IMU data.

Velodyne’s lidar sensors make it quick and easy for companies to build highly accurate 3D models of any environment for mobile mapping. The sensors deliver a high-resolution surround view image to accurately measure and analyze the environment. The performance, range and compact form factor of Velodyne sensors enable developers to design versatile systems that can be configured to mobile mapping needs.