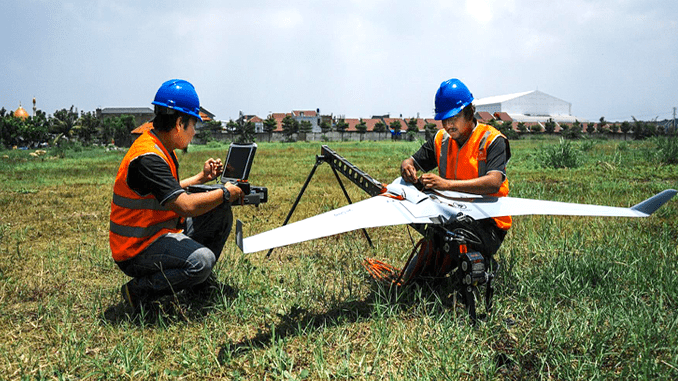 Terra Drone Indonesia once again made history after successfully obtaining a license to operate a long-distance mission or better known as Beyond Visual Line of Sight (BVLOS), issued by the Directorate of Airworthiness & Aircraft Operations (DAAO), Director General of Civil Aviation, Ministry of Transportation of the Republic of Indonesia. By obtaining this permit, Terra Drone Indonesia will be able to fully utilize the maximum potential use of drones, especially for missions such as surveys, surveillance, and patrols.

As is known, the Ministry of Transportation of the Republic of Indonesia already has rules that regulate drones, which is Civil Aviation Safety Regulations (CASR) Part 107, governing the small Unmanned Aircraft System (sUAS) with a maximum weight of 25 kilograms. This regulation was introduced through Peraturan Menteri Perhubungan Nomor 163 Tahun 2015, which means it has been in effect since 5 years ago. The regulation explains many things, including the restrictions that drone pilots must follow such as the prohibition of flying over crowds, the prohibition of flying in a state of intoxication, and the prohibition of flying out of sight (Beyond Visual Line of Sight / BVLOS).

CASR Part 107 was prepared and introduced to the public as an effort by the government to ensure the safety of civil aviation, because drones share space with other airspace users. Therefore, many things need to be considered in order to fly a drone safely. It is not easy for many civil aviation authorities in the world to issue these permits because of the very high risk. However, with the experience and risk management system that Terra Drone Indonesia has, this permit can be granted.

“A thorough and tested operating procedure is the key to obtaining this permit from the civil aviation authority in Indonesia. Terra Drone Indonesia continues to be committed to introduce the benefits of drone technology through safe operation, as well as supporting the government in ensuring the safety of civil aviation, “explained Michael Wishnu Wardana, CEO of Terra Drone Indonesia.

Due to its ease of operation & access and affordability, drone technology is increasingly being adapted by many industries. However, the safety of operations really needs to be considered to ensure the safety of civil aviation. To that end, Terra Drone Indonesia will continue to provide good examples as a benchmark, and will assist the government in socializing the applicable rules through promotional activities, involvement in forums and associations, and education to customers.

In addition to Unifly, Terra Drone’s other previous investments C-Astral, which develops high-endurance fixed-wing UAVs; RoNik Inspectioneering, which provides wireless inspection services for confined spaces; and Ventus Geospatial, which has patented gas leak detection technology. Going forward, Terra Drone will continue to invest in technology companies with cutting-edge solutions for drones. For all the latest news and information about Terra Drone, visit the company’s LinkedIn and Twitter handles.