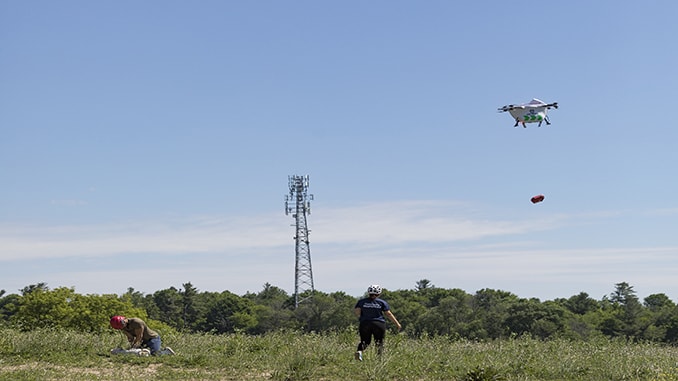 Drone Delivery Canada Corp. is pleased to announce that on June 26th, 2020 it successfully completed Phase Two of its AED (Automated External Defibrillator) On The Fly project with Peel Region Paramedics and Sunnybrook Centre for Prehospital Medicine. Building on the success of Phase One of the study, the Company was able to demonstrate ease of use of its AED drone solution when provided to community responders in a simulated cardiac arrest scenario. The testing further validates that using DDC’s proprietary drone delivery platform with cargo drop functionality to deliver rapid first responder technology via drone may reduce response time to cardiac arrest patients in the field while being utilized by lay responders.

On June 26th, 2019, the Company had announced a 100% successful Phase One of the project.  Phase Two utilized the Sparrow, with the new cargo drop capability and a new audio announcement system, to drop an AED where a designated lay bystander would then retrieve the AED and apply it to a simulated cardiac arrest patient in a rural environment.  Multiple pairs of lay bystanders and simulated cardiac arrest patients in multiple locations were used to test the AED drone solution.  Response time to drop, retrieve and apply an AED, and physiological and psychological human factors in a stressful situation were measured during the testing.

Dr. Sheldon Cheskes, an Associate Professor at the Department of Family and Community Medicine, University of Toronto and the Principal Investigator of the ‘AED on the Fly’ Pilot Research program commented, “Phase Two of our research was truly a success. Our previous research within our rural community suggested the need to optimize the simplicity of AED use once delivered by a drone to the site of a cardiac arrest. Today we were able to markedly improve the speed of drone descent, the ability to accurately drop a protected AED from a drone at a safe height but most importantly see first-hand the benefits of technology that guides the first responder through the application of an AED after being released by the drone in a simulated cardiac arrest scenario. All these factors strengthen the likelihood that not only may drones decrease time to first AED shock in rural and remote communities but the fear of AED use can be minimized by ‘real time’ interaction between a first responder and trained personnel demystifying the use of AEDs during cardiac arrest. After today’s test flights it will not take long to see drones as part of an organized 911 response to cardiac arrest in rural communities. We are thankful to our grant funders the Cardiac Arrhythmia Network of Canada (CANet) and Zoll Medical Inc. (Chelmsford, Massachusetts) for their support of this project.”