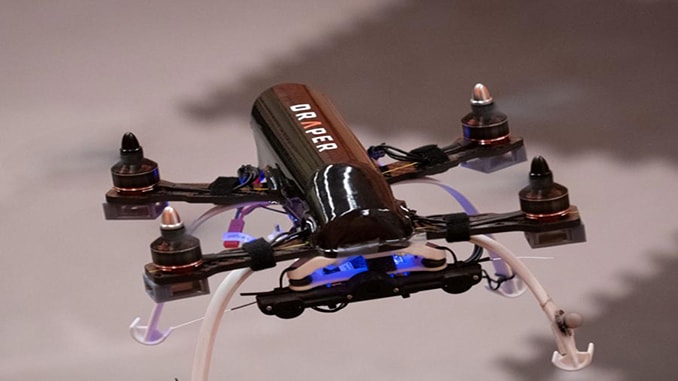 Draper and the Department of Defense Work Together on Military Drones

Global spending on unmanned aerial vehicles is poised for a major expansion in the coming decade as militaries invest an estimated $98 billion in new capabilities. One factor driving the market are improvements in UAV software that can enable drones of various sizes by various vendors to operate with new capabilities, most notably autonomous navigation.

The goal is to provide soldiers with an unmanned system that can fit in a backpack and serve as eyes and ears in areas too dangerous for troops to physically enter, such as suspicious buildings or a turn in the road ahead. Delivering such capability requires an autonomy architecture and software package that can enable UAVs to do more than ever before.

Draper is working with the Department of Defense under a three-year contract to address these challenges—and improve UAVs—by focusing on the most challenging aspects of autonomous navigation. In a series of recent demonstrations, a team from Draper and the DoD customer tackled technical issues related to reducing collisions, enhancing onboard intelligence and developing new robust navigation methods.

Draper’s engineers demonstrated their software on a small UAV chosen by the customer to navigate narrow interiors in simulated urban environments, create 3D maps of their interior, identify and avoid objects and return autonomously to the base. Unmanned systems equipped with Draper’s autonomy architecture and software package need no remote pilot, no GPS guidance, no communications link for navigation and no pre-programmed map of the area—the onboard software, lightweight processor and low-cost sensors do all the work autonomously in real-time.

“The new generation of small UAVs need to be able to fly independently and plan an obstacle-free route in real-time without any prior knowledge of the environment,” said Jon Cash at Draper. “The goal is closed-loop and fully autonomous flight, but until now that goal has been out of reach for the UAV community at large.” Cash leads a team that builds on Draper’s six decades of experience in unmanned and robotic systems for air, land and sea.

Gian Luca Mariottini at Draper said another requirement was to reduce the cognitive load of the operator. “The UAV’s full autonomy means the operator can focus on higher value tasks, such as intelligence, surveillance and reconnaissance. Toward that end, Draper designed a user interface to provide a soldier with up-to-date information about the environment and the type of objects of interest observed during the UAV’s flight, as well as information about the UAV’s operational status.”

Mariottini, an expert in unmanned aerial and ground systems, said Draper put its UAV system through field tests to demonstrate agile obstacle avoidance, GPS-denied localization and 3D mapping on a tiny cellphone-grade processor using only an inertial measurement unit (IMU) and a single passive camera (stealthier than a laser). The Draper team also built in target recognition capabilities, which can be co-trained with mission-relevant synthetic data generated by realistic simulators.

In the short term, Draper is adding new features to its autonomy system, including new onboard artificial intelligence (AI) solutions for inferring depth distance for each pixel in an image to enable operations in more complex 3D environments. Longer term, Draper wants to enable autonomous adaptive exploration of large environments, possibly for groups of cooperating drones. The system is platform-agnostic and ready for integration into micro-, mini- and small-UAVs and autonomous land systems.

Draper’s work on the UAV program builds on its legacy in autonomous systems, algorithms and positioning, navigation and timing. In addition to working with autonomous systems, Draper has assisted U.S. government agencies with projects including cybersecurity, technology protection and miniature cryptography for high stress environments.