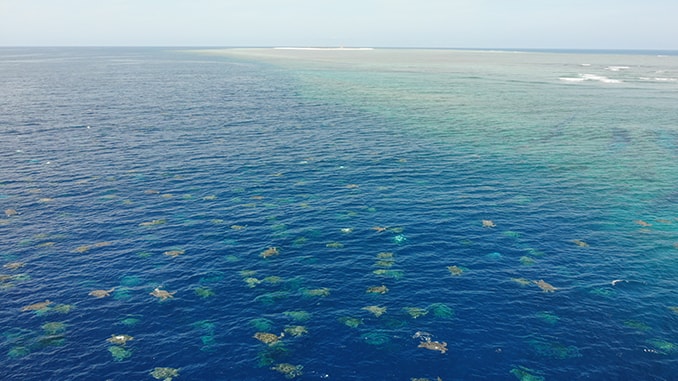 Drone vision captured in December 2019 as part of the Raine Island Recovery Project showed up to 64,000 green turtles around the island waiting to come ashore and lay clutches of eggs.

Dr Andrew Dunstan from the Department of Environment and Science (DES) and lead author of the paper said researchers had been investigating different ways of conducting turtle population surveys.

“New scientific research published on Monday 8 June in PLOS ONE found that drones, or Unmanned Aerial Vehicles (UAVs), were found to be the most efficient survey method,” Dr Dunstan said.

“Underwater video using a Go-Pro may also be a useful alternative for in-water surveys of turtles.

“Previous population survey methods involved painting a white stripe down the green turtles’ shell when they were nesting on the beach. The paint is non-toxic and washes off in a couple of days.

“From a small boat, we then counted painted and non-painted turtles, but eyes are attracted much more to a turtle with a bright white stripe than an unpainted turtle, resulting in biased counts and reduced accuracy.

“Trying to accurately count thousands of painted and unpainted turtles from a small boat in rough weather was difficult. Using a drone is easier, safer, much more accurate, and the data can be immediately and permanently stored.”

The drone vision was analysed, frame by frame in the laboratory, reducing observer error and allowing accurate counts on painted and unpainted turtles.

“The ratio of unpainted and painted turtles allowed us to estimate the total population for last December to be 64,000 green turtles waiting to nest on the island,” Dr Dunstan said.

“When we compared drone counts to observer counts we found that we had under-estimated the numbers in the past by a factor 1.73,” Mr Fitzpatrick said.

“By using drones we have adjusted historical data. What previously took a number of researchers a long time can now be by one drone operator in under an hour.”

“We’re seeing the world’s largest aggregation of green turtles captured in these extraordinary drone images that are helping to document the largest turtle numbers seen since we began the Raine Island Recovery Project,” Ms Marsden said.

“Raine Island is the world’s largest green turtle nesting site and that’s why we’re working with our Raine Island Recovery Project partners to protect and restore the island’s critical habitat.

“We’re taking action to improve and rebuild the island’s nesting beaches and building fences to prevent turtle deaths, all working to strengthen the island’s resilience and ensure the survival of our northern green turtles and many other species.”

“The Raine Island Recovery Project is a great example of business, governments, Traditional Owners and not-for-profits working together to protect the Great Barrier Reef, in this case the remarkable ecosystem of Raine Island,” he said.

Dr Dunstan said the Raine Island Recovery Project is making a major contribution to the future sustainability of the world’s most important green turtle rookery.

“This research is of prime importance to the understanding and management of the vulnerable green turtle population,” he said.

“In the future, we will be able to automate these counts from video footage using artificial intelligence so the computer does the counting for us.”

The research paper can be found here: https://journals.plos.org/plosone/article?id=10.1371/journal.pone.0228524(external link)