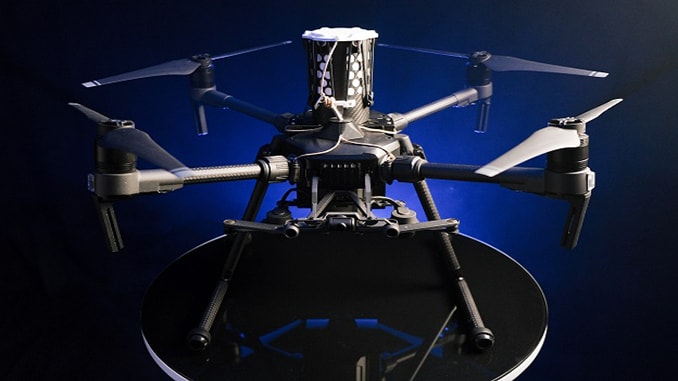 Drone Rescue Systems GmbH presents the new parachute system for the DRS-M210. After the DJI M600, another DJI model now receives a specially developed rescue parachute. The system is expected to be available on the market at the end of July/beginning of August. Reserve your system immediately at Drone Rescue Systems.

Focusing on the DJI M210 series, Drone Rescue’s developers have set their sights on the next commercial drone from DJI. “With this new product, we are taking the natural step of securing commercial drone applications as well as police and fire brigade operations, since the DJI M210 V2 drone is used for many of these applications,” reports Andreas Ploier, CEO and co-founder of Drone Rescue Systems GmbH. With regard to professional applications, the DJI M210 V2 is one of the world’s best-selling drones and is used for inspections, protection and rescue services. The design, as well as the flexibility of the aircraft, allow for a variety of industry-specific applications. For this purpose, some of the drones are equipped with cost-intensive cameras and sensors that require special protection in the event of a failure of the flight system. “Investments for these drones are sometimes quite high. Therefore, in the event of a crash, special attention should be paid to the protection of the drone as well as the payload,” says Ploier.

In order not to limit the drone’s capacities with the parachute system, it was ensured that the flight time or range as well as the payload capacity would only be affected minimally. Nevertheless, the system should provide maximum protection for men and material. “We reduced the weight of the DRS-M210 system by using a lightweight parachute system and miniaturizing the electronics so that the limit of approximately 430g for the
DJI M210 V2 is not exceeded,” said Ploier. As with all other parachute systems, Drone Rescue does not use pyrotechnics as a release mechanism. This also has a positive effect on the weight and ensures that the DJI
M210 series can travel without any additional effort, as the parachute system is not subject to any safety regulations or hazardous materials regulations. In contrast to the pyrotechnics commonly used, a sturdy elastic system catapults the parachute out of the carbon tube.

Ploier emphasizes that all parachute systems are subject to a uniform product philosophy. The systems must be completely autonomous, lightweight, reusable and non-pyrotechnical. Furthermore, the rescue systems of the Austrian manufacturer are equipped with a quick-release mechanism and a parachute in cross canopy design.
The latter ensures a high pendulum and wind stability. Thus, damaged drones can be transferred quickly and from a low height into a stable sinking phase. The kinetic impact energy is thus reduced. The installation of the DRS parachute system is simple. Thanks to the “Mount & Fly” function, which consists of a bayonet lock, the low-maintenance DRS system can be mounted to a DJI M210 series at any time without great mechanical effort. This creates a reliable connection between the drone and the parachute rescue system, which fixes the rescue system to the drone in a stable manner, even during unsteady flight or strong vibrations.

The use of the parachute system simplifies the issuing of flight permits and approvals according to the new regulations according to EASA-Specific Operations Risk Assessment (SORA) and ensures that all flight movements are recorded and stored by the electronics. In the event of damage, this data can be evaluated and, if necessary, passed on for clarification. “This feature can lead to lower insurance rates, depending on the insurance company. Because of these lower rates, the purchase costs for our parachute rescue system would quickly pay for itself,” Ploier explains.

Drone Rescue Systems has established itself internationally in the commercial sector and has made a very good name for itself holding the only ASTM certification to date for the DJI M600 Series and is planning further certifications for its product portfolio.