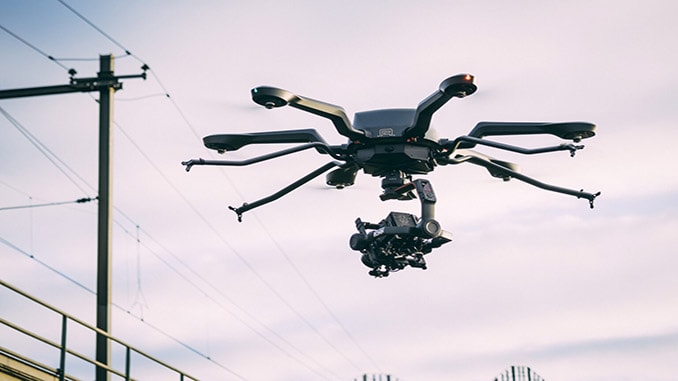 Acecore Technologies, developer and manufacturer of high end European made commercial multirotors, released their third drone platform today. The new Acecore Noa has a 20kg payload capacity that leaves nothing to be desired and the endurance of a full hour. Its six enlarged rotors give Noa the edge over the competition. Sporting huge 28″ reinforced carbon fiber props, this pixhawk-based hexacopter excels at staying in the air longer than ever before.

The new Acecore Noa was designed to be the first drone to combine heavy lifting with endurance in harsh environments. Its six custom ace motors are mounted upside-down onto its true carbon fiber monocoque frame allowing users to operate the drone in 9mm/h downfall. While keeping the water out, Noa’s hollow arms generate a cool airflow through the system. This active air cooling ensures the system can be used in outside temperatures up to 50 degrees ceclius.

Four battery packs ranging from 11A-23A can be inserted and locked in place by the new shark fin battery latch. Each of the six booms mount to Noa’s centerpiece using double action quick release locks. Screw-on propellor adapters result in a completely toolless setup of the system.

The Acecore Noa hexacopter has a maximum payload capacity of 20 kilograms useful load, but can be operated at much lower weights. A 3kg/ 6.6lbs payload such as the Sony A7R iv and Gremsy T3 V3 gimbal can be flown for over 40 minutes. Land surveying, 2D & 3D LiDAR mapping, wind turbine/ powerline inspection and a wide array of professions will find the extended endurance especially useful. Noa’s carbon fiber retractable landing gear offers a 360 degrees unobstructed view which is preferable for many applications, including cinematography and security.

Users can seamlessly swap payloads using Acecore’s modular quick release. Stabilized by the internal octople wire damping, the standard Gremsy quick release offers the flexibility that professionals often need. Using optional adapters, almost any third party payload can be fitted. Even the DJI Ronin 2 gimbal, equipped with RED Weapon 6K and Sigma 50-100 T2 cine lens is amongst the options. At 12kg/ 26.2lbs, this Hollywood-tier cinematic setup falls well within Noa’s lifting capabilities and can be flown for upwards of 25 minutes.

Besides the cinematic industry, users will find comfort in the redundancy that is offered by using a high end hexacopter drone as opposed to a quadcopter. With an engine to spare, the Acecore Noa can safely land in the rare case of an engine/ ESC failure. Recovering the highly valuable payload and preventing material or physical damage to people and objects on the ground.

The Noa can be operated under the 25kg/ 55lbs Maximum Take-off Weight (MTOW) limit that many CAA authorities exercise. This version of the drone comes with its own specification sheet that specifies the MTOW of 24.95kg as opposed to the 36.9kg MTOW of the standard version. Staying under this limit, users can still operate payloads up to 8kg/ 17.6lbs with the improved redundancy and reliability of a hexacopter.

Although the motor configuration is completely new, Noa fits right into the Acecore ecosystem. This means it is compatible and can be used with virtually all controller options and payloads that Zoe and Neo work with.

The new Acecore Noa is available for order from Acecore directly or any authorized reseller effective immediately. First units will start shipping the first week of June 2020.