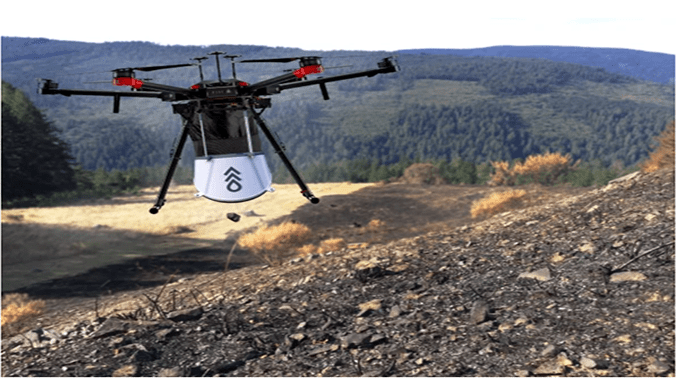 Flash Forest Drones to Plant 40,000 Trees a Month in Canada

This week, on land north of Toronto that previously burned in a wildfire, drones are hovering over fields and firing seed pods into the ground, planting native pine and spruce trees to help restore habitat for birds. Flash Forest, the Canadian startup behind the project, plans to use its technology to plant 40,000 trees in the area this month. By the end of the year, as it expands to other regions, it will plant hundreds of thousands of trees. By 2028, the startup aims to have planted a full 1 billion trees.

The company, like a handful of other startups that are also using tree-planting drones, believes that technology can help the world reach ambitious goals to restore forests to stem biodiversity loss and fight climate change. The Intergovernmental Panel on Climate Change says that it’s necessary to plant 1 billion hectares of trees—a forest roughly the size of the entire United States—to limit global warming to 1.5 degrees Celsius. Existing forests need to be protected while new trees are planted; right now, that isn’t working well. “There are a lot of different attempts to tackle reforestation,” says Flash Forest cofounder and chief strategy officer Angelique Ahlstrom. “But despite all of them, they’re still failing, with a net loss of 7 billion trees every year.”

Drones don’t address deforestation, which is arguably an even more critical issue than planting trees, since older trees can store much more carbon. But to restore forests that have already been lost, the drones can work more quickly and cheaply than humans planting with shovels. Flash Forest’s tech can currently plant 10,000 to 20,000 seed pods a day; as the technology advances, a pair of pilots will be able to plant 100,000 trees in a day (by hand, someone might typically be able to plant around 1,500 trees in a day, Ahlstrom says.) The company aims to bring the cost down to 50 cents per tree, or around a fourth of the cost of some other tree restoration efforts.

When it begins work at a site, the startup first sends mapping drones to survey the area, using software to identify the best places to plant based on the soil and existing plants. Next, a swarm of drones begins precisely dropping seed pods, packed in a proprietary mix that the company says encourages the seeds to germinate weeks before they otherwise would have. The seed pods are also designed to store moisture, so the seedlings can survive even with months of drought. In some areas, such as hilly terrain or in mangrove forests, the drones use a pneumatic firing device that shoots seed pods deeper into the soil. “It allows you to get into trickier areas that human planters can’t,” Ahlstrom says.

After planting, the company returns to track the progress of the seedlings. “Depending on the project, we’ll go back two months after, and then a year or two after, and then three to five years after” to make sure the trees are actually sequestering as much carbon as they planned, she says. “If we fall under a threshold plant goal of a certain number of trees, we’ll go back and ensure that we are hitting our goal.” Because the company chooses native species and uses its seed pods to protect the seeds from drought, the process doesn’t typically require work from humans to keep the seedlings alive; instead, the strategy is to plant a large number of trees and let some naturally survive.

Each planting is using about four species, with a goal of eight. “We very much prioritize biodiversity, so we try to plant species that are native to the land as opposed to monocultures,” says Ahlstrom. “We work with local seed banks and also take into account that the different changes that climate change brings with temperature rise, anticipating what the climate will be like in five to eight years when these trees are much older and have grown to a more mature stage, and how that will affect them.”

After launching the company in early 2019, the small team had a working prototype by the middle of the year and ran a pilot test in August, followed by larger tests in September and October. So far, Ahlstrom says, they’ve seen high rates of survival in controlled studies, and are hoping to replicate those in real world settings.

After the current planting near Toronto and another in British Columbia, the company will begin a restoration project in Hawaii later in the year, with plans to plant 300,000 trees there. It’s also planning tree-planting pilots in Australia, Colombia, and Malaysia. In some cases, funding comes from forestry companies, government contracts, or mining companies that are required to replant trees; in other cases, the startup plants trees for companies that offer tree-planting as a donation with the sale of products, or for landowners who can get a tax break, in some areas, for planting trees. “There’s a lot of philanthropy around it, and then also just a solid business model with a desperate need and demand to plant trees,” Ahlstrom says.

No Replies to "Flash Forest Drones to Plant 40,000 Trees a Month in Canada"