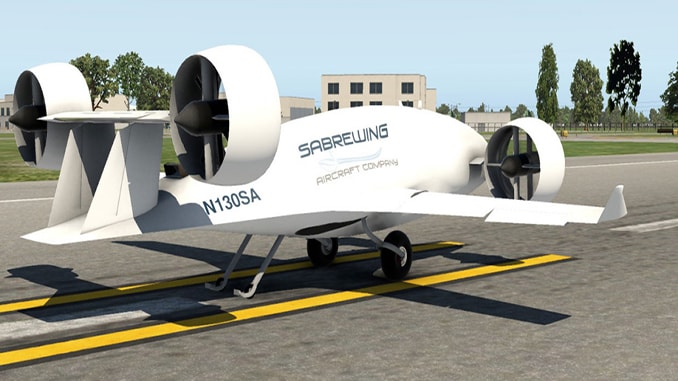 Named after an Old English word for a type of dragon, the Rhaegal-A won’t be making its mark by burninating the countryside. Instead, the electric cargo drone capable of taking off and landing like a helicopter is in the spotlight today during a U.S. Air Force conference about “flying car” technologies.

The drone’s planned Friday rollout, which will not include any flights, marks a new step for Sabrewing, a startup based in Camarillo, Calif., after it became the first recipient of a contract awarded through the Air Force’s Agility Prime program. Once conditions allow for its first flight tests at Edwards Air Force Base, the Rhaegal-A drone could undergo Agility Prime demonstrations to test capabilities such as detecting and avoiding potential collisions, operating without GPS signals, and performing medical evacuations of simulated battlefield casualties.

“Typically a battlefield is maybe 50 nautical miles away, and we’re able to make it there in 15 minutes as opposed to 30 minutes in a standard helicopter,” says Ed De Reyes, the chief executive of Sabrewing. “So we could, in theory, have all the casualties back within that golden hour and potentially save a lot of lives.”

Some U.S. military helicopters and aircraft used in medical evacuations can fly at speeds comparable to the Sabrewing drone’s 230-mile-per-hour (370-kilometer-per-hour) top speed. But the drone’s advantage could come from a potentially lower price tag and the capability to perform more dangerous medical evacuations under enemy fire without exposing crewed helicopters or aircraft.

The Rhaegal-A drone relies on four ducted fans powered by electric motors that receive electricity from a  turbine. That enables it to carry up to 2,700 pounds (1,225 kilograms) when performing vertical takeoff and landing like a helicopter, and up to 5,000 pounds (2,268 kg) when taking off and landing from a runway like an airplane. Such lifting capacity is more than sufficient to meet the U.S. Air Force’s requirements for evacuations.

But the Rhaegal-A is still just half the size of the larger Rhaegal-B that Sabrewing plans to sell to both commercial and military customers. Whereas Rhaegal-A can only carry custom containers, the Rhaegal-B, with double the lifting capacity, could carry two standard LD-1 containers typically used by both airlines and air cargo carriers. Unlike the Rhaegal-A, the Rhaegal-B also has two turbines producing up to 2.8 megawatts of electric power—made by Safran Helicopter Engines—for redundancy and added safety in case one turbine fails. Such improvements represent an evolution in the Rhaegal design since IEEE Spectrum last checked in on the drone back in 2019.

Sabrewing envisions modifying those standard containers for the military mission so that they could become minihospital suites containing heart and respiration monitors, medicine, seats for flight medics and medical litters for carrying the wounded. If the Rhaegal-A testing goes well, the Rhaegal-B might eventually carry up to six casualties and two flight medics. “There’s never a time after they get on the aircraft that they don’t have direct medical intervention until they get to the hospital,” De Reyes says.

The Air Force also wants to evaluate Sabrewing’s detect-and-avoid system that would enable the drones to autonomously avoid collisions. To fly as safely as possible, the Rhaegal-A relies on 10 sensors including lidar with a 350-meter look-ahead capability, a camera system that can spot other aircraft about a mile (1.6 km) away, radar, an infrared detector for night landings, and a send-and-receive GPS system.

Another point of interest for the Air Force is how well the Rhaegal-A can operate in a difficult or hostile environment where GPS signals might become jammed or spoofed. Sabrewing declined to share specifics on the drone’s GPS alternative at this time, but De Reyes noted that it’s the 21st-century version of an “old school” technology that has benefited from modern improvements in aircraft electronics and computing power. Notably, some drones, aircraft, ships, submarines, and spacecraft still make good use of inertial navigation systems (also known as inertial guidance systems) with increasingly cheap and accurate sensors that can calculate location based on movement measurements.

In reality, the Rhaegal-A can already operate autonomously in terms of following a flight plan from takeoff through landing, De Reyes says. Even with a federally mandated human operator in charge, the drone’s controls mostly consist of pushing buttons and using a keyboard to issue orders that the drone carries out on its own. Computers control all aspects of the cargo drone’s flight to the extent of prohibiting a human operator from potentially endangering the drone by stalling out through loss of airspeed or flying into a thunderstorm or building.

Even the Rhaegal-A drone’s modular design has a certain appeal for both military and commercial applications. Sabrewing built the drone so that it could be disassembled and reassembled in four parts: the nose section, cargo and wings, engine bay, and tail section. That enables the startup to remove and replace any faulty sections so that the cargo drone is operational again within 24 hours instead of the normal month or two required for more extensive aircraft inspection and maintenance.

“Say you’re coming in for landing and you hit a goose, and it cracks the front nose section,” De Reyes says. “You can still land the aircraft and we’ll return it to service overnight by just replacing the nose section.”

The Sabrewing team did not originally design the Rhaegal cargo drone with military missions in mind. But the startup was approached by U.S. military officials and eventually decided to apply for the Agility Prime program. It recently received a Small Business Innovation Research phase II contract worth US $3.25 million over two years.

That pivot to military and government contracts may help Sabrewing ride out the economic turmoil affecting the world during the COVID-19 pandemic. Beyond the Air Force contract, Sabrewing also has one unnamed customer backed by a U.S.-friendly government that has placed an order for 65 cargo drones. And the commercial air cargo market isn’t doing too badly during the pandemic, as people’s demands for online delivery are “stretching the muscle” of air cargo fleets, De Reyes says.

The Rhaegal-A remains grounded for now because of California’s restrictions aimed at curbing the spread of the coronavirus. But Sabrewing sees considerable advantages in having extra U.S. Air Force engineering help and equipment during future flight testing. De Reyes also highlighted the benefits of testing in the heavily controlled and protected airspace near U.S. military bases and test ranges.

After initial flight tests at Edwards Air Force Base, the startup hopes to move on to more rigorous testing in the Aleutian Islands, a string of islands mostly belonging to Alaska, where the cargo drone can practice dealing with high winds, cold weather, and low visibility.

The end goal for Sabrewing is to deliver a rugged and reliable cargo drone that De Reyes likes to compare to a locomotive. He doesn’t mind people thinking of it as a big and heavy hauler as opposed to a sleek and futuristic aircraft. “We’re not a jet fighter, we’re a cargo aircraft,” De Reyes says. “So for us, the ability to haul a lot of cargo doesn’t have to be at lightning speed.”