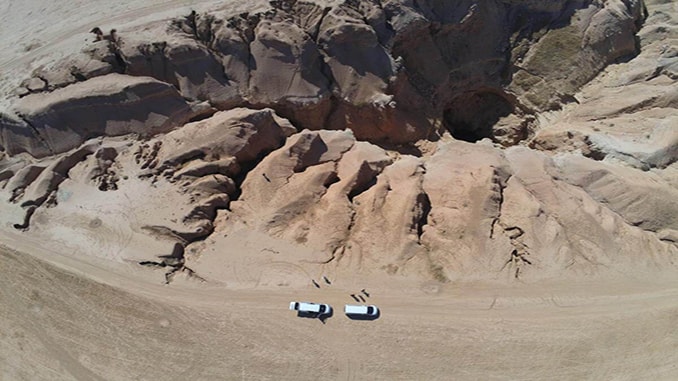 Parrot, the leading European drone group, announced today its support for Human Rights Watch’s mission of investigating human rights abuses around the world. To assist the organization’s work, Parrot is providing its powerful ANAFI drones, along with advanced software and technical support.

Most recently, as part of a Human Rights Watch investigation into ISIS atrocities in northern Syria, Parrot provided support in capturing aerial imagery and 3D data of the al-Hota gorge near Raqqa, a suspected mass grave site used by ISIS.

As part of the investigation, Parrot provided ANAFI drones and on-call support for piloting and technical assistance. The dangerous terrain and steep cliffs of al-Hota made it necessary for Human Rights Watch investigators to use drones to capture imagery at the bottom of the gorge. Data captured by the drones was also used to create a 3D topographical model of the al-Hota gorge with the software Pix4D Mapper. These 3D maps may be used to further investigate below the surface of the water.

“Human Rights Watch is doing incredibly important work around the world,” said Henri Seydoux, chairman and CEO of Parrot. “We are honored to push the boundaries of how our technologies can be applied to help them in their missions.”

This is the second mission Parrot has supported with advanced drone technology and software. Drones have proven to be a vital tool for professionals across many fields to safely access areas otherwise impenetrable by humans and to quickly and efficiently collect valuable data.

The Human Rights Watch investigation, which began in 2017, resulted in an extensive report published today. Titled “Into the Abyss: The al-Hota Mass Grave in Northern Syria,” the report investigates whether the al-Hota gorge was used as a mass grave during ISIS control over the area.

As a result of the investigation, Human Rights Watch calls upon local authorities to treat al-Hota and other suspected ISIS mass graves in Syria as crime scenes, identify the victims at the bottom of the gorge, notify the families of those who were killed, and hold accountable those who committed atrocities.