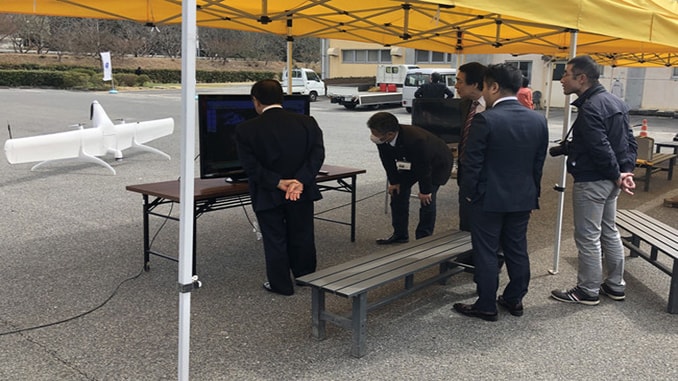 Teams from Swift Tactical Systems, in partnership with its Japanese counterpart, Swift-Xi, both subsidiaries of Swift Engineering, completed personnel search and rescue and animal identification missions as part of a contract with Okayama Prefecture in Japan. The proof of concept program validates Swift’s unmanned aerial systems and capabilities under unique scenarios. First, the team’s ability to perform advanced search and rescue missions in dense forests, and second, the system’s ability to quickly detect, identify, and track the nighttime movements of animals that are destructive to the region.

“Our teams proved that our combined military expertise and advanced UAS technology with real-time intelligence and data gathering capabilities are a powerful force in the industry. We were able to cover a 550-acre area and find all of our targets in less than 35 minutes,” says Alex Echeverria, Vice President of Swift Tactical Systems.

While this is the first time Wake-Cho is testing unmanned systems and technologies to perform tasks commonly addressed by humans on foot, it is not the first time Swift teams have provided real-time intelligence to government officials in Japan. Swift Tactical Systems and Swift-Xi recently completed multiple contracts for Kobe City. Government officials there are using Swift’s unmanned aerial systems and teams to track environmental changes such as landslide monitoring, seawall shifts, algae blooms, and invasive species, all of which pose risks to its aging population.

“As Japan’s population rate steadily declines and its aging workforce continues to rise, government officials and the private sector are looking for ways to manage critical tasks that are traditionally performed by people on the ground. We are proud to support government officials and private sector visionaries who are looking ahead to ensure the safety of Japan’s population and its future,” says Rick Heise, President and CEO of Swift Engineering.

About Swift-Xi
Swift-Xi Inc. is a Japanese joint venture between Swift Engineering Inc. and the Kobe Institute of Computing, located in the city of Kobe in Hyogo prefecture. Swift-Xi is focused on accelerating social innovation by cultivating and developing disruptive technologies and innovation for autonomous systems, robotics & AI, urban mobility, and power management.

Knowledge Base Presented By Allianz "Drone Use Ready for Take-off"