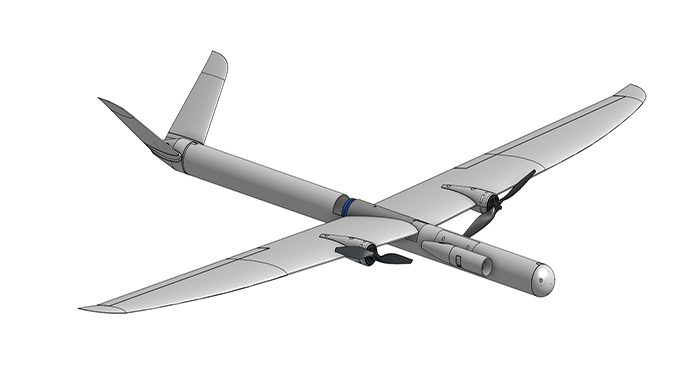 The aircraft, called the Black Swift SØ (S-zero), is a compact, yet rugged, aerial platform (Figure 1) designed to be hand-launched and quickly climb up to 15,000 feet. Its unique tail design allows deep-stall landing with near vertical descent and 10-foot accuracy. The rapid ascent and descent allow the SØ to quickly and accurately capture 3-dimensional (3D) wind profiles at various levels—essential for precision cargo drops.

Manufactured entirely in the USA, the SØ was engineered from inception for flight in extreme atmospheric conditions, including hurricane deployments, and has a 90 minute cruise time. Its advanced avionics enables fully autonomous operation with minimal training. Designed for rapid atmospheric profiling, its automated sampling patterns and scripting allows for “launch-and-forget operations.”

The SØ is a cost-effective aerial solution perfect for determining the thermodynamics of the atmosphere. Its modular system design allows for rapid integration of new sensors and capabilities. The system’s onboard Multi-Hole Probe (MHP) measurements are tightly coupled with the aircraft’s control algorithms, allowing significant improvement in measurement accuracy, while its data formatting and transmission seamlessly integrate with existing Air Force systems.

“The SØ is a new and unique technology for the Air Force,” says Jack Elston, Ph.D., CEO of Black Swift Technologies. “Not only is the SØ simple and easy to use, resulting in a dramatic reduction in training time, but through volume sales to both the commercial and defense markets, the Air Force will be getting this advanced technology at commercial prices, not DOD prices, which in the long run will be very valuable, if for no other reason, simply the cost savings.”

More information on Black Swift Technologies and their suite of UAS solutions can be found at: bst.aero.