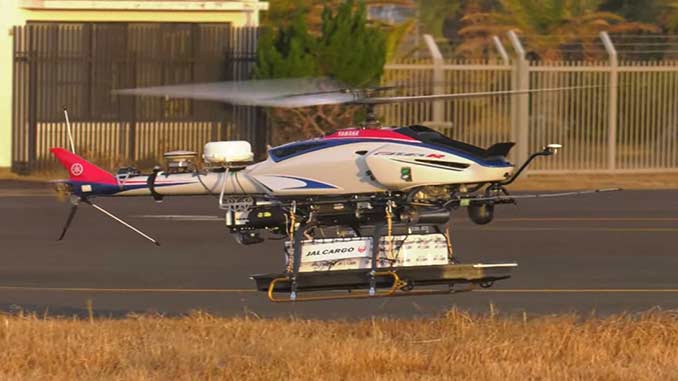 Japan is an island nation blessed by abundant fishing grounds that dot the archipelago’s coasts, providing fresh catches that make their way not only to tables in the local communities, but also to major city centers like Tokyo and Osaka. To make such quick distribution of fresh seafood possible, Japan’s transport industry employs a number of innovative logistics methods.

In February 2020, Yamaha Motor collaborated with Japan Airlines Co., Ltd. (JAL) on a new venture: conduct a field test in which freshly caught seafood is loaded onto a Yamaha industrial-use unmanned helicopter at an outlying island near the fishing ground and flown long-distance by the helicopter—above water and beyond visual range—to an airport for a connecting cargo flight.

Roughly 1,000 km west of Tokyo as the bird flies lie the Goto Islands, a small archipelago in Nagasaki Prefecture well-known since days of old for its quality seafood. Could fresh fish from the morning’s catch still be enjoyed at a Tokyo restaurant the very same day? The issue’s cover photo shows the trial held to accomplish just that. In a coordinated effort with ground transport and a regularly scheduled Japan Airlines flight, some 20 kg of high-end longtooth grouper and other fresh fish successfully made the journey from the town of Shinkamigoto to a restaurant in Tokyo on the same day, with Yamaha’s FAZER R G2 industrial-use unmanned helicopter flying the cargo beyond visual line of sight for the first leg of the journey.
In the trial, the helicopter flew the more than 35 kilometers between Kamigoto Airport near the fishing area and a seaside park in the city of Saikai in Nagasaki Prefecture on the island of Kyushu. Takeoff and landing was carried out by the onsite personnel, but the overwater flight was conducted remotely via satellite from Yamaha’s Unmanned Systems office, some 800 kilometers away in Hamamatsu, Shizuoka Prefecture. The helicopter flew a pre-programmed route at a 100-meter altitude while being monitored and controlled via data and video transmitted by the helicopter, completing the flight in roughly 40 minutes as planned. The same trip would take nearly 3 hours by car and ferry.
“In the pre-trial test flight the day before, we delivered cargo akin to medical supplies. The 46 km round-trip flight between Kamigoto Airport and Ojika Airport, both in the Goto Islands, required that the helicopter fly over the water and out of sight. We had to make a small course deviation to avoid flying over fishing boats, but the weather conditions were stable and pretty much everything went according to plan,” says Osamu Sakamoto of Yamaha’s Unmanned System Section.

Surveying Forests from the Air

With the Great East Japan Earthquake and Tsunami of 2011 as an impetus, Yamaha began developing technology for automatic flight via satellite for its unmanned helicopters. Incorporating a satellite link enables operations across much wider areas than line-of-sight radio transmissions, and since implementing the technology, Yamaha’s unmanned helicopters have achieved real results in a variety of fields, such as aerial measurement for commercial industry and for disaster assessment.
“The technology for automatic flight via satellite is already well-established for the most part,” continues Sakamoto. “To link this technology to solving the issues societies are facing, one course of action is to increase the payload in order to carry bigger, heavier cargo.” At CES 2019, the world’s largest consumer electronics trade show held in the U.S.A., the next-generation Yamaha industrial-use unmanned helicopter concept model on display represented this approach, featuring a larger fuselage and a 70 kg payload—double that of the current model.