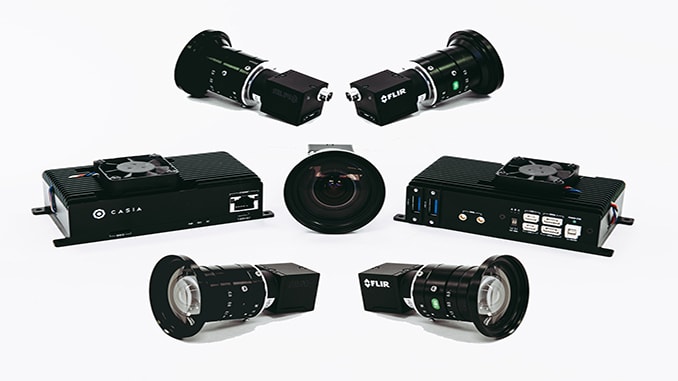 Iris Automation today announced the launch of Casia 360 – the first onboard detect-and-avoid (DAA) solution with a 360-degree radial field of view to enable commercial Beyond Visual Line of Sight (BVLOS) operations for Unmanned Aircraft Systems (UAS).

The Casia system allows an Unmanned Aircraft System to see and react to the aviation environment around the aircraft. Casia 360 detects other aircraft in all directions, uses computer-vision algorithms to classify them, makes intelligent decisions about the threat they may pose to the drone, then triggers an alert to the pilot in command and automated maneuvers to safely avoid collisions.

Casia is a combination of both hardware and software that is lightweight, low power and small in size. The low SWaP system is composed of two onboard controllers and five long-range optical cameras providing a 360-degree field of view. The software is packaged in a self-contained embedded supercomputer that works with the machine vision cameras onboard.

“Casia 360 allows a drone to have a complete sense of its surroundings so it can avoid potential collisions from any direction,” said Iris Automation CEO Alexander Harmsen. “We developed this technology based on feedback from our customers and regulatory bodies around the world. It enables drones to be used for an even greater range of long-distance use cases and saves money, increases safety and unlocks applications across multiple industries: railway, energy sector, utility powerline inspections, package delivery, and life-saving search and rescue operations.”

The Casia technology has been extensively tested, with real-world test flights and mid-air collision scenarios flying various manned aircraft against UAS, over 12,000 real-world encounters and more than 50,000 encounters in simulation. Casia is currently being flown by dozens of customers, across 12 countries and holds BVLOS approvals from regulators in the U.S., South Africa, and Canada.

Casia 360 is available for commercial sales preorder now. The initial limited launch of the 360 system has sold out and this system is currently on back-order. For more information, and to secure your purchase, visit www.irisonboard.com/casia.

About Iris Automation
Iris Automation is building a computer-vision-based collision avoidance system that helps drones see the world how pilots do. The company is based in San Francisco and is led by a team with experience at NASA, Boeing, and Nvidia, including PhDs in computer vision. Iris is a key partner on multiple FAA UAS Integration Pilot Programs, a participant of NASA’s Unmanned Traffic Management program and a participant of Transport Canada’s BVLOS Technology Demonstration Program.

1 Reply to "Iris Automation Announces Casia 360, The First Onboard Detect-and-avoid System For UAS With 360-degree Capability"