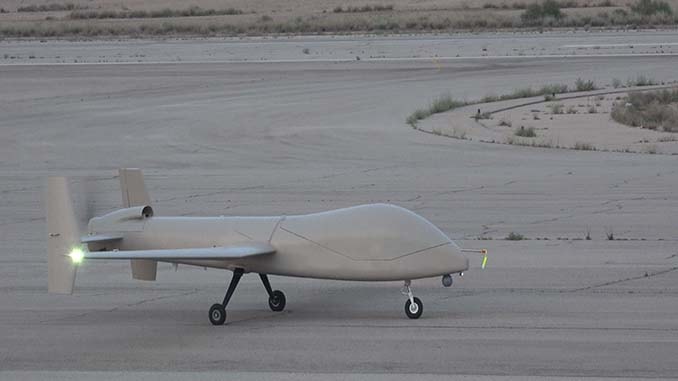 UAVOS in collaboration with King Abdulaziz City for Science and Technology (KACST), Saudi Arabia, has developed and demonstrated a progressive flight control system capability for the Saker MALE UAS family. The flight of the Saker-1B UAS has been operated under remote control with no need for a ground control station at the takeoff / landing site. With the sophisticated flight control system capability, UAS can automatically land in remote runways located thousands of kilometers away, where it is serviced by a crew before it takes off for an additional mission. Based on advanced communication systems, combined with precise automated taxiing, takeoff and landing, the flight control system, constitutes a major technological leap in the remote operation concept, offering utmost operational flexibility.

The flight control system capability was tried successfully by flight testing. The entire process including the automated landing, taxiing on the ground after landing, engine switching off and on, payload supporting, pre-takeoff taxiing and automated takeoff of the Saker-1B was fully controlled from the two remote control stations.

The advanced flight control system capability saves on command station resources by eliminating the need to return to the original takeoff point for fueling. Control of the flight by two ground control stations at once makes it more effective to manage the operational capabilities such as UAV control, real-time planning and updating of routes, updating the UAS behavior attributes, real-time receipt of mission data. In this way, the technology saves flight time and fuel, increases operational availability in the mission area and provides several options for routine and emergency landing.

With the new capability, Saker-1B MALE UAS can be used in even more challenging missions such as control of drug smuggling, illegal immigration, pollution, and search & rescue operations. The UAS is the optimal solution that can put you in control at sea and beyond the horizon.

With an endurance that exceeds 19 consecutive hours and the ability to ascend up to 16500 feet (5000 м), Saker-1B is designed with state-of-the-art technologies including an automatic takeoff and landing capability, redundant flight control surfaces. The aircraft is also equipped with both
Line-of-Sight (LOS) and Beyond Line-of-Sight (BLOS) data link systems for over-the-horizon operations.

“UAVOS is pleased to have the opportunity to collaborate with KACST on R&D projects,” said CEO and Lead Developer Aliaksei Stratsilatau. Our scientific partnership has demonstrated a breakthrough operational and technological capability of the flight control system for the Saker-1B MALE UAS family. The full-scale tests were important to confirm the interactions
between the flight control system, command & control stations and integrated payload”.