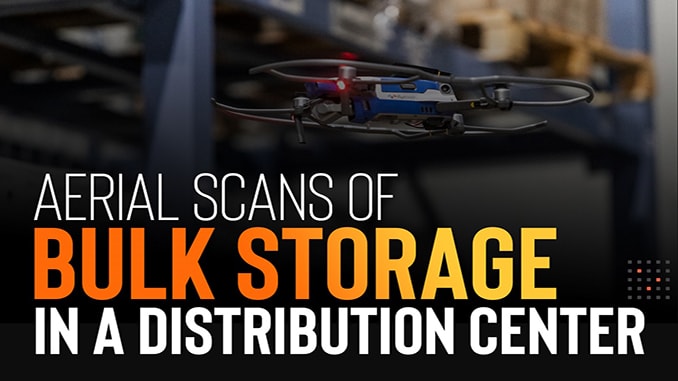 When it comes to deploying fully autonomous drones to scan inventory in warehouses, there have been several deployments in rack areas to help scan pallet barcodes and locations. However, drones are now being deployed to automatically scan bulk storage – which often takes up a much larger share of warehouse space than rack storage.

While rack-based pallets, even those stored in VNAs, can be scanned using compact, off-the shelf drones, bulk storage has posed a challenge given the continuous movement of people and equipment in aisles, obstacles such as pillars & overhead signs and the sheer scale of area to be aerially scanned. Moreover, it may be impractical to scan individual barcodes on bulk storage using drones; instead, aerial video and images captured using drones can be analyzed (manually or algorithmically) for counting cartons, detecting honeycombs, locating SKUs, monitoring space utilisation, etc.

As we build up the momentum for showcasing FlytWare at Modex 2020 and beyond, FlytBase has been successfully deployed aerial scans – as a proof-of-concept – for bulk storage at a million-square-foot distribution center in the Greater Atlanta area. With thousands of bays, this warehouse is designed for nearly 100% bulk storage of home appliances. Counting the inventory in this vast DC consumes significant time, labor and equipment, especially during peak season with the facility operating at near 100% capacity. It turns out that drones can address these challenges faced by inventory stakeholders at such large warehouses – especially when deployed in the form of fully autonomous fleets with built-in precision landing, battery charging, aisle crossing, etc.

Warehouse automation, whether using ground robots or drones, is rapidly converging towards the use of computer vision and sensor fusion techniques. With overhead wires already in place over bulk bays, the use of navigational aids to support indoor autonomous navigation of drones turns out to be relatively easy. In fact, overhead drone flights provide rich image & video data that, in turn, can be processed using AI/ML techniques to delineate pallets, cartons and even individual items.

Deploy a FlytWare PoC to scan bulk storage locations – in as quickly as 2 weeks!