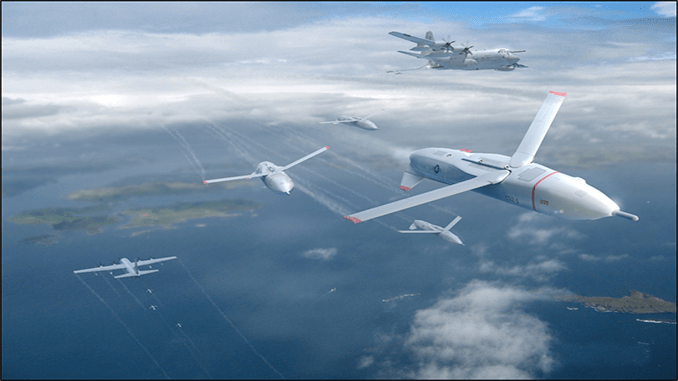 The project has been funded through the £160m UK Ministry of Defence (MOD) Transformation Fund designed to deploy and deliver advanced projects for the armed forces. Announcing the project, Williamson said that it was designed to complement the “leading edge” technology of the F-35 Joint Strike Fighter.

The MOD previously gave more details on the program saying that the drones would work alongside fighter aircraft like the F-35 and Eurofighter Typhoon to increase their lethality.

“By working with our F35 and Typhoon combat aircraft, these swarms will allow our pilots to deliver precise, lethal combat power more effectively and safely.”

At last year’s Air and Space Conference, then Air Chief Marshal Sir Stephen Hillier repeated the ambitious timeframe and commented on the program, saying: “The RAF Rapid Capabilities Office is a world-leader in delivering projects, from Tempest to counter-UAS, such as our plans for swarming drones. For our swarming drones program, if we had set about this three years ago in a traditional acquisition route we would not be where we are today.

“The team were set the most challenging objectives and I am confident enough to say the results, thus far, are looking pretty impressive. So much so that I can declare that we will shortly be forming an experimental squadron – Number 216 Squadron – to bring this capability quickly to the frontline.”

216 Squadron has operated in a number of capacities, beginning life as part of the Royal Naval Air Service in 1917. Later, 216 Squadron moved to a transport-focused role during WW2, a role it reprised during the Falklands War, operating a fleet of Lockheed Tristar 500 aircraft, before being disbanded in 2014.

No Replies to "RAF To Launch Swarming Drone Squadron In April"