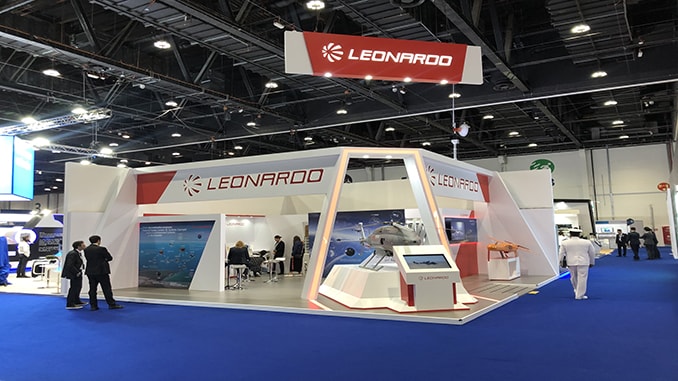 Leonardo, the Italian-headquartered defense and security multinational, is attending UMEX (Hall 4 Stand B10) in Abu Dhabi for the second time. The event, which focuses on unmanned systems and solutions, opens today. Leonardo regularly features at major aerospace events in the UAE and its technologies will also appear at Expo 2020 Dubai.

Leonardo is the only European company which can provide complete unmanned solutions for civil and military customers and also ensures the security of the airspace. Its comprehensive portfolio of skills and technologies includes fixed-wing and rotary-wing platforms, sensors, mission and ground control systems, drone navigation and traffic management, training services and Counter-Unmanned Aerial Systems (C-UAS). The latter were recently deployed by Italian, UK and US armed forces to protect airports and military operations from drone threats.

Leonardo has significant operational experience in the field of unmanned systems. The company’s Falco and Falco EVO have been selected by customers in the Middle East and elsewhere and are operationally-proven. Two high-profile examples are the United Nation’s MONUSCO humanitarian mission, which is helping stabilize the Democratic Republic of the Congo, and the European Union FRONTEX agency’s surveillance and rescue missions over the Mediterranean Sea. Leonardo’s Falco family was recently bolstered by the addition of the readily exportable Falco Xplorer, Leonardo’s largest-ever unmanned platform, which can provide persistent, multi-sensor strategic surveillance to military and civil customers, relaying information in real-time via secure satellite connection to C4I centers, with over 24 hours’ endurance. The Falco Xplorer’s maiden flight took place in January with the support of Italian Air Force personnel, the start of a flight campaign that will assess the aircraft’s full range of capabilities and certify the system against NATO’s airworthiness standard STANAG 4671.

At UMEX, Leonardo will exhibit its Rotary Unmanned Air System (R-UAS) AWHERO, a dual-use platform that can perform civil and military missions day and night, over land and sea.

With its distinctive orange livery, visitors to Leonardo’s stand will quickly recognize the M-40, the latest addition to Leonardo’s Mirach family of target drones. The M-40 was recently involved in a series of flights as part of a trial campaign which saw the drones simulating modern airborne threats, allowing for the realistic demonstration of MBDA’s latest surface-to-air Mistral missile. A fleet of M-40 drones is in-service with the Italian Armed Forces, with Leonardo operating the targets on behalf of the Armed Forces on a managed service basis, providing trained crew and all necessary support. Other nations, including some of those attending the trial, have registered interest in a similar service model and the M-40 is also available for purchase as a standalone product.

At UMEX Leonardo will also present its training services portfolio. Going from strength to strength in the unmanned domain, the company received the Approved Training Organizations Certificate for very light and light category unmanned systems training services supply through its
Helicopter Training Academy.

Leonardo’s strategic interest in the unmanned sector has led the company to invest in a number of enabling technologies that are considered essential to the development of tomorrow’s UAS. In November Leonardo announced its investment in Skydweller Aero Inc., a start-up specialising in the development of a solar-powered unmanned aircraft. Then in
January Leonardo acquired the Swiss helicopter company Kopter, which is already working on modular architectures suitable for future developments towards more disruptive technologies, mission capabilities and performance, including hybrid/electric options. This will allow Leonardo to take further important steps towards offering an even greater range of products and services and expand its market footprint.

UAVOS To Conduct Search And Rescue UAS Demonstrations At umex 2020