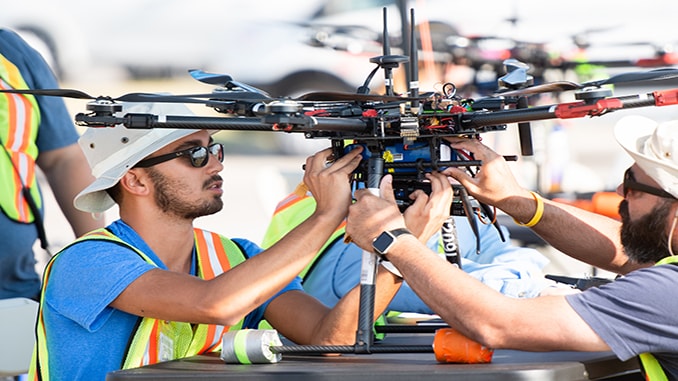 The National Aeronautic Association announced today that work being done by the Texas A&M University-Corpus Christi Lone Star UAS Center of Excellence & Innovation and NASA is among nine aviation and space achievements that will compete for the 2019 Robert J. Collier Trophy for excellence in aeronautics and astronautics in America.

“We were flattered when NASA asked us to join them as part of their Collier Trophy submission,” said Mike Sanders, executive director of Lone Star. “Being selected as a finalist is a huge honor and points to the importance of TAMU-CC’s aeronautics research in UAS Traffic Management. Lone Star UASC is proud of our over five-year partnership with NASA and we are looking forward to our continued partnership with them in advanced aeronautics research.”

The nomination focuses on the work Lone Star and NASA have done on the Unmanned Aircraft Systems Traffic Management project, which was extensively tested in 2019. A priority of the project is to safely integrate UAS into the National Airspace System as the number of small UAVs increases, especially in urban areas due to the need for remote package delivery, bridge and pipeline inspection, or remotely piloted air taxis.

The Collier Trophy is given in recognition of achievement in aeronautics for improving the safety and efficiency of air and space vehicles. For 108 years, the Collier Trophy has been the benchmark of aerospace achievement. Awarded annually “… for the greatest achievement in aeronautics or astronautics in America,” it has been bestowed upon some of the most important projects, programs, individuals and accomplishments in history.

Past winners include the crews of Apollo 11 and Apollo 8, the Mercury 7, Scott Crossfield, Elmer Sperry, Howard Hughes and Orville Wright. Projects and programs that have been the recipient of the Collier include the B-52, the Boeing 747, the Cessna Citation, the F-22 and the International Space Station.

“Some of history’s greatest technological feats have received the Collier,” said NAA President Greg Principato. “The nominees this year are very much in that tradition, spanning aeronautics and astronautics and including many new technologies and approaches to solving problems. The nominee that comes away with the Collier this year will truly have earned the distinction of Greatest Achievement.”

page1image35190224The Collier Trophy Selection Committee will meet April 2 in Arlington, Virginia, and the recipient will be announced publicly the following day.

The formal presentation of the Collier Trophy will take place June 11 at a location to be determined.

About Texas A&M University-Corpus Christi: Offering more than 80 of the most popular degree programs in the state, Texas A&M-Corpus Christi has proudly provided a solid academic reputation, renowned faculty, and highly rated degree programs since 1947. The Island University has earned its spot as the premier, urban doctoral-granting institution in South Texas, supporting a UAS test site, two institutes and more than 40 research centers and labs.

Discover your island at www.tamucc.edu.