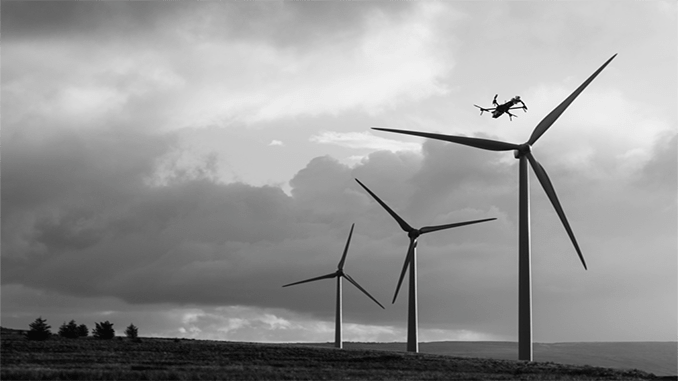 Its advanced navigation enables the Black Swift E2 to conduct highly accurate, up-close inspections of infrastructures (Figure 1), even in extreme environmental conditions. Leveraging advances in computer vision and machine learning, the Black Swift E2 is an intelligent drone can be combined with an inspection payload making it capable of completely autonomous flights. With this optional laser navigation technology, the Black Swift E2 can safely and reliably navigate around complex structures, while delivering real-time actionable data to its operator.

Designed, manufactured and serviced entirely in the USA, the E2 was engineered from inception for structural and industrial inspections. Its domestic roots mean that there are no open source software concerns and no Chinese components used in the assembly of the Black Swift E2.

“The Black Swift E2 as our UAS platform of choice for conducting wind turbine inspections,” says Oier Peñagaricano, CEO of Alerion. “It provides us unparalleled performance, even in extreme conditions like heavy rains and high winds. The Black Swift E2 can be fitted with our patented laser navigation technology permitting high-precision navigation up close to structure like viaducts, airplanes, and commercial wind turbines, both onshore and offshore. With the press of a button, the Black Swift E2 can perform a fully-autonomous wind turbine inspection and real-time damage identification in as little as 15-minutes.”

The Black Swift E2 carries its payload up front rather than on the belly of the aircraft enabling operators to get full field-of-view, even looking vertical. A quick-change payload bay enables swapping the E2’s sensor packages. Its battery pack is also easy to change, and its placement is adjustable to maintain perfect balance while accommodating a host of payloads. Typical payload includes an RGB camera, laser positioning and guidance system, and radio modem, but can be customized to the operator’s individual requirements including LiDAR, thermal imagery, trace gas sensors, radiometers, and multispectral cameras.

A truly mobile solution, the Black Swift E2 easily folds down (Figure 2) and fits into a custom carrying case for easy transport while protecting the aircraft from the potential damage during transit.

“Our partnership with Alerion has resulted in the most advanced autonomous inspection drone on the market today,” states Jack Elston, PhD., CEO of Black Swift Technologies. “The combination of BST’s avionics and flight management system perfectly complements Alerion’s computer vision-based navigation and edge computing capabilities. The E2 is an unmanned inspection solution unrivalled in the industry right now.”

The E2 makes use of the SwiftCore™ flight management system (FMS) which consists of a state-of-the art autopilot and intuitive user interface completely designed from the ground up by BST to automate missions in difficult conditions with minimal user training.  The SwiftCore makes use of many advanced capabilities including machine learning for preventative maintenance and is currently being tested in cutting edge machine vision research to enable routine flights beyond the operator’s line-of-sight. With all components of the core firmware and electronics design having been developed by BST, and the electronics manufactured in Colorado, the SwiftCore forms the nucleus of a completely American-made aircraft system.

Leveraging BST’s proprietary Flight Planning User Interface, operators can program the Black Swift E2 in minutes to calculate the area under review and then begin collecting data for immediate analysis and decision making. With its intuitive tab-driven interface, flight planning is simple and easy to accomplish. Mission monitoring and mapping is all done from a handheld Android™ Tablet loaded with BST’s SwiftTab™ software. Gesture-based controls enable users to confidently deploy their Black Swift E2 with minimal training while being able to collect data in diverse environments with confidence. With its available RTK real-time GPS corrections, the Black Swift E2 delivers even greater location accuracy and tracking.

Based in Boulder, CO and founded in 2011, Black Swift Technologies LLC, is recognized for delivering reliable, robust, and highly accurate unmanned aircraft systems capable of flying scientific payloads in demanding atmospheric environments (high-altitude, corrosive particulates, and strong turbulence). Its purpose-built scientific aerial platforms are used around the globe for a variety of specialized atmospheric research missions in extreme conditions, including monitoring and assessing wildland fires, volcanoes, tornadoes, and hurricanes.

SwiftCore and AESL functionality can be integrated into any UAS platform and customized to meet the specific demands of your missions. More information on Black Swift Technologies and their suite of sUAS solutions can be found at: bst.aero.