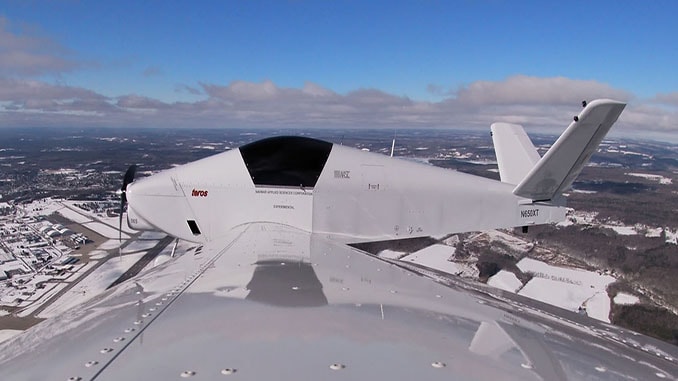 Based-upon the popular Sonex Aircraft Xenos Motorglider, its rugged, aerobatic-capable structure enables the NASC TEROS to provide a flexible plug and play payload capability for multiple payloads up to 600 pounds at high altitudes for extended flight durations. The NASC TEROS was designed in collaboration with Sonex Aerospace, LLC and is a Medium Altitude Long Endurance Unmanned Aircraft Vehicle (UAV) capable of operating within the Group 4 and Group 5 UAV classifications. TEROS was designed and built to FAA Part 23 (structure and systems) and MIL F 83691 (flight characteristics) standards.

“The successful flight testing of TEROS is a major milestone for the Sonex companies,” remarked Sonex Aerospace CEO Mark Schaible. “This benchmark has major significance with regard to the future of Sonex Aerospace and Sonex Aircraft LLC, promising growth opportunities to take Sonex to the next level of business operations, while continuing to serve our traditional sport aircraft market.”

The TEROS is undergoing preparation for follow-on envelope expansion flight testing. NASC and Sonex will continue to consider improvements to be integrated into the next production update.

Via a Business Collaboration Agreement with Navmar Applied Sciences Corp. (NASC), Sonex Aerospace is supporting development of the Teros Group 4/5 UAS. With roots in the experimental aircraft industry, the Oshkosh, WI based company is heavily invested in R&D and has been designing, building, testing, selling and supporting manned aircraft systems since the early 1970’s With many thousands of worldwide fleet hours to its credit, Sonex aircraft are light weight, strong and cost-efficient with incredible performance and economy.