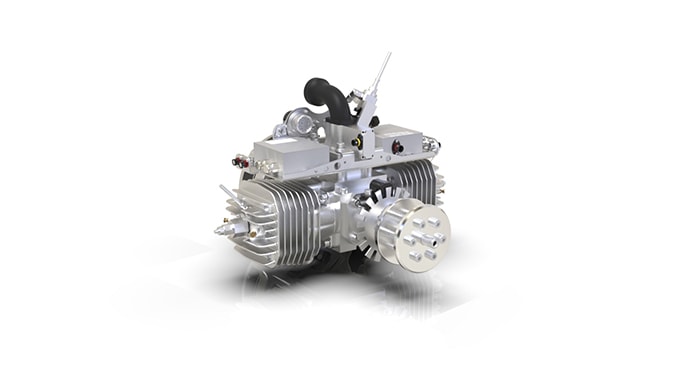 The new heavy fuel engine SP-210 HF FI TS was developed based on the existing gasoline engine SP-210 FI TS. Sky Power’s first HF engine is marking the beginning of the subsequent development of HF engines which are based on completely new HF technology.

The new HF engine from Sky Power runs on a kerosene-oil mix of 50:1 using JET A, JET A1 or JP-8. As part of the development of the engine, Sky Power has taken a new approach to HF technology. The goal was to heat up the fuel mixture in a reliable and controlled manner and to achieve excellent starting properties. A large number of components were newly developed, such as the new KHU 100 (Kerosene Heating Unit). The new HF
concept can also be applied as an upgrade to all injection engines of the SP-210 series. The modular design of the engines used by Sky Power is thus being continued and expanded with the HF Systems. When configuring a
propulsion system, customers have a choice on generators, starter-generators, power-supplies, and complete hybrid configurations, and can now choose between different fuel types, to meet the application’s needs. This will continue to apply to the other engines in Sky Power’s product portfolio.

The newly developed KHU 100 manages the start-process jointly with the engine management unit ECU030. Both systems communicate through the CAN-Bus Interface. The temperature is controlled by sensors, installed
in the drive unit.

The SP-210 HF FI TS is characterized by high system reliability over a wide range of conditions. Engines with the twin-spark (TS) system also run at a lower idle; their general operational behavior is quieter. Safety and reliability increase in both single- and multiple-cylinder engines, and multiple-cylinder systems benefit from active redundancy of two independent ignition systems.

Whether fixed-wing, rotary-wing or hybrid-transitional applications, the new Sky Power HF Engines can be used with all UAS Systems. „For the Operator of these UAS there are obvious benefits with the HF-Technology “,
notes Karsten Schudt, CEO of Sky Power GmbH. “The Systems are very flexible and reliable and therefore reduce the operational cost.”