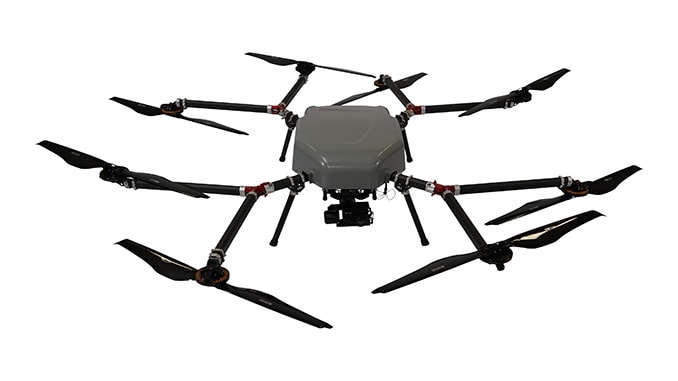 Skyfront, the leading provider of hybrid-electric Unmanned Aerial Vehicles (UAVs), and Silvus Technologies, a leading provider of Multi-Input Multi-Output (MIMO) communications, announced today a partnership that combines Skyfront’s five-hour endurance Perimeter UAV with Silvus’ high-power StreamCaster radios. The combined product, the Perimeter XLRS, can fly for up to 5 hours while maintaining command and control links and streaming real-time video up to 60 miles / 100 km from the ground control station.

This partnership has enabled UAV operators to inspect pipelines and power lines and perform surveillance missions across the world. The Perimeter’s onboard StreamCaster radio provides the Perimeter with a steady, reliable video and control link. The StreamCaster’s MIMO and beamforming technologies successfully overcome range limitations, signal attenuation and multipath interference, to allow the Perimeter XLRS to operate in environments where other data links typically fail, such as in maritime, mountain, and jungle deployments.

The Perimeter XLRS’s integration of the StreamCaster is comprehensive. It includes:

“The integration of the StreamCaster into the Perimeter line of UAVs has enabled it to fully utilize its extreme endurance and fly beyond-line-of-sight (BVLOS) missions with ease,” said Troy Mestler, CEO of Skyfront. “We are very excited to be partnering with Silvus Technologies to bring long-range aerial platforms into the mainstream.”

“Silvus Technologies is proud to have Skyfront as one of our UAV partners. The Perimeter XLRS’s ability to support long endurance VTOL flight with the Silvus MN-MIMO waveform makes it a unique differentiator in the marketplace,” said Kasey Cooper, Director of Unmanned Systems at Silvus Technologies.

Skyfront manufactures the longest endurance hybrid-electric multirotor drones in the world, with proven flight times of 5 hours. Skyfront’s UAVs are designed and equipped for beyond-visual-line-of-sight missions, including video, telemetry and control links up to 60 miles (100 km) away from the ground control station. Customers use the Perimeter 4 and 8 for inspection and surveillance missions worldwide due to extremely long flight times, communications range, safety, rapid deployment, and ease of use. For more information, please visit www.skyfront.com.

How The U.S. Department Of The Interior’s New Drone Policy Hurts America