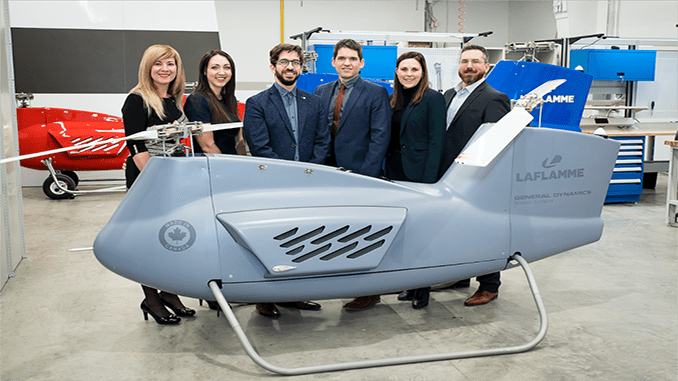 Laflamme Aéro, located in the Thetford Mines region, announces the conclusion of a $ 2 million round of financing in which Investissement Québec, Anges Québec and Anges Québec Capital. Investments that are timely for the company which is preparing to market its LX300 drone from 2020, the first aircraft in the world of the unmanned helicopter type capable of carrying loads of 90 kilos.

“The LX300 is one of the largest civilian drones in the world. With its 300 kilos, it is mainly distinguished by its versatility, its ability to transport heavy loads and its flight autonomy of eight hours. This investment of $ 2 million now allows us to propel and promote our product to major national and international markets, “explains Enrick Laflamme, engineer, co-founder and president of Laflamme Aéro, the company he founded with his brother. David also an engineer and vice president of engineering for the growing company.

In addition to the commercial deployment of the LX300, the new investments announced today will support the improvement of the company’s infrastructure and the establishment of an assembly line, the addition of new resources to support the growth of Laflamme Aéro , as well as continuity in research and development of new products.

Developed by the family business since 2013, the LX300 is an innovative product intended for the private, commercial, military and government sectors. Very versatile, the device can be fitted with surveillance cameras or even transport equipment over long distances, to supply a sector that is difficult to access, for example. The LX300 has successfully encountered numerous flight tests and other delicate take-off and landing maneuvers in the past two years.

“It has all the advantages of a helicopter, but without the need for a pilot. It is fitted with a tandem rotor system (two propellers), allowing vertical takeoff and landing and great stability. All of these elements and the quality of the design make it an extremely reliable product with competitive operating costs, ”adds Laflamme.

“Laflamme Aéro has developed an efficient and unique technology, which demonstrates Quebec’s excellence in terms of innovation. We are proud to support a young advanced aeronautical company established in the Chaudière-Appalaches region, to allow it to be competitive in the various targeted sectors in order to be successful in a multi-billion dollar global market. ” , says Pierre Fitzgibbon, Minister of the Economy and Innovation.

“A highly competitive sector like aeronautics requires major investments in research and development from companies, over several years, before reaching the pre-commercialization stage. As part of the government’s expanded mandate, Investissement Québec intends to make special efforts to finance and support businesses in non-urban regions such as Laflamme Aéro. We want to make a difference in order to mitigate the shortcomings identified during critical stages where risk-return levels are often deemed too high to interest certain private players, ”said Guy LeBlanc, President and CEO, Investissement Québec.

Note that Laflamme Aéro benefits from the support of Transport Canada in the development of a certification adapted to the highest standards, as well as from General Dynamics Mission Systems, one of the largest defense and security companies in Canada, with which the Chaudière-Appalaches company recently signed a cooperation agreement to promote the LX300 to major defense and security players in Canada and internationally.

ABOUT THE AÉRO FLAME

Founded in 2006, Laflamme Aéro is a family business located in St-Joseph-de-Coleraine in the Thetford Mines region of Quebec headed by brothers David and Enrick Laflamme, both engineers and aviation enthusiasts. The company specializes in the development of tandem rotor helicopters, including the LX300, which will be marketed in 2020. Laflamme Aéro also has a consulting engineering division, Laflamme Engineering, which carries out mechanical engineering projects under- contracting for companies in the aerospace, energy and manufacturing sectors.

Investissement Québec’s mission is to promote the growth of investment in Québec, thereby contributing to economic development and job creation, in all regions. The Company provides businesses with a full range of financial solutions, including loans, loan guarantees and equity investment, to support them at all stages of their development. In addition, she is responsible for administering tax measures and prospecting for investments abroad.

Founded in 2008, Anges Québec is a network of over 250 angel investors who have the mission of investing and investing in innovative Québec companies. To date, members of the Anges Québec network have invested more than $ 100 million in the Québec economy, totaling more than 265 investments in more than 137 innovative companies. Thanks to its professional development center, Anges Québec supports its members in the constant acquisition of new knowledge and skills inherent in investment.

How The U.S. Department Of The Interior’s New Drone Policy Hurts America