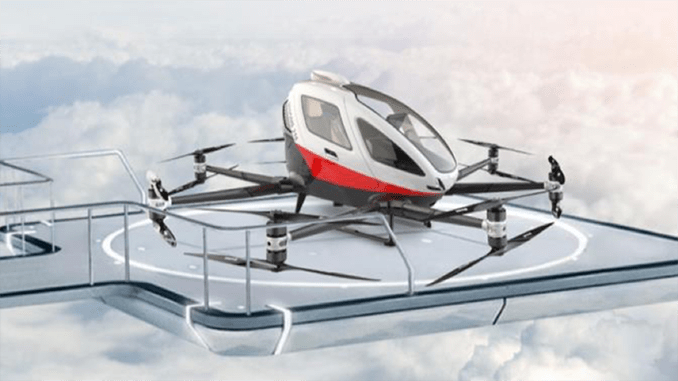 EHang — which recently demonstrated its two-seat EHang 216 AAV in North Carolina — details its concept in a new white paper on UAM systems, dated Jan. 15, 2020. According to the paper, UAM systems “will have the best chance at full-scale implementation if they are focused on safety, operated smartly, and connected under the command of a centralized platform.”

Safety considerations will demand that vehicles be equipped with redundant systems, the white paper says, while “smart operation” means that they will be piloted autonomously, “which not only obviates the need for an in-vehicle pilot and the associated costs, but also enhances safety and makes the vehicle more controllable from the ground.

“Finally, cluster management techniques centralized at a ground-based command-and-control center would allow UAM operators to control a multitude of vehicles simultaneously in an orderly and safe manner,” the white paper states. “This way, all flight routes could be pre-registered and pre-determined so that UAM vehicles can travel only between certified ‘base points,’” yielding a structure that resembles “an on-demand bus system rather than a taxi system.”

EHang’s concept clearly advantages its own AAVs, which have been designed to operate autonomously under the control of a centralized platform. This is in contrast to some of the other UAM vehicles it considers in the white paper, such as Joby Aviation’s S4, which is designed to operate with a pilot initially.

EHang argues that autonomous operations will not only enhance safety by eliminating human errors caused by pilots, but also reduce staffing costs, making the UAM business model “attractive and sustainable to investors and other participants who have not seen the returns on ridesharing that they had hoped for.” In December, EHang raised $40 million through an initial public offering on the Nasdaq, and is now trading under the symbol EH.

The white paper estimates that each of EHang’s AAVs — which have a reported acquisition cost of US$300,000 — could generate annual revenues of more than $350,000 and profit of $138,000 in UAM operations, assuming a unit fare of $2.50 per passenger-kilometer, somewhat above the approximately $1.50/km of a New York City cab.

EHang says this model is “highly conservative and does not capture efficiency gains potentially led by scale economies,” but it also assumes operating hours of 20 hours per day or 6,000 hours per year — far beyond what is achieved by most aircraft today. By contrast, Uber has based its air taxi cost assumptions on 2,000 flight hours per vehicle per year.

EHang says it intends to build a complete platform to support the operations of the UAM ecosystem, in addition to manufacturing AAVs. “To that end, it seeks collaborations with various parties including governments, regulators, and business organizations,” the white paper states.