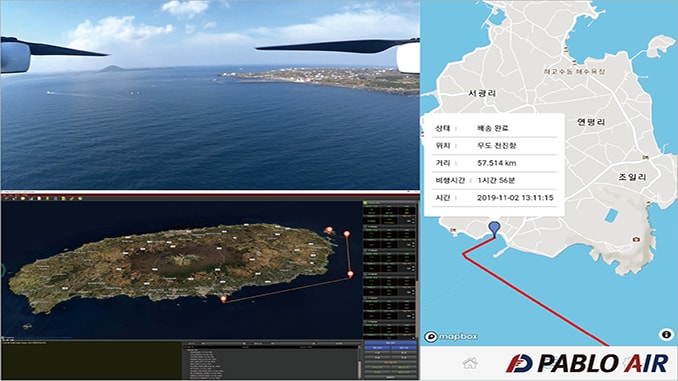 PABLO AIR Becomes The First Korean Company To Have Succeeded In A 57.5 km Package deliver Using A Drone

PABLO AIR successfully conducted a long-distance drone delivery from Seogwipo Port on Jeju Island to Cheonjin Port on Wudo Island on November 2, 2019, ushering in an era wherein delivery services can be received via drone anywhere.

The drone is considered an iconic concept of the 4th Industrial Revolution, and the competition to introduce drone in the business and gain a competitive edge in the commercial market is becoming fierce in the US, China, Europe, and elsewhere in the world. Previously, small-sized, low-priced drones were used mainly to obtain images and videos; now, however, expensive, medium-sized drones are conducting various missions including farming, surveillance, measuring, and delivery. Going forward, as large-sized, unmanned aerial vehicles become available and autonomous flight drones are used commercially as a personal transportation vehicle, drones are expected to play an increasingly important role in transportation and traffic.

PABLO AIR is an unmanned aerial hardware and software development company based in Korea. Founded on August 8, 2018, it has just celebrated its first anniversary, yet it became the first Korean company to conduct long-distance drone delivery successfully. With drone being the key component of its services, the company focuses on developing swarming flight platforms and solutions. Building on its unmanned aerial vehicle services, PABLO AIR is expanding its business scope to other fields such as entertainment and education. The company has the capability to compete with world-class companies at drone performance art shows. Due to the company’s swarm flight technology, they have the largest drone performance art show in Korea.

Drone delivery was made possible by the UAVs Logistics Solution developed by PABLO AIR.

PABLO AIR is also working closely with the military, which is keenly interested in swarm flight technology. Recently, the Korean army has created a dronebot combat group that will conduct surveillance, reconnaissance, attack, and transportation of military supplies.

PABLO AIR said it will take advantage of its original swarm flight technology to develop unmanned aerial solutions that it can use in multiple fields including private and public sectors as well as the military to emerge as a global market leader.

No Replies to "PABLO AIR Becomes The First Korean Company To Have Succeeded In A 57.5 km Package deliver Using A Drone"