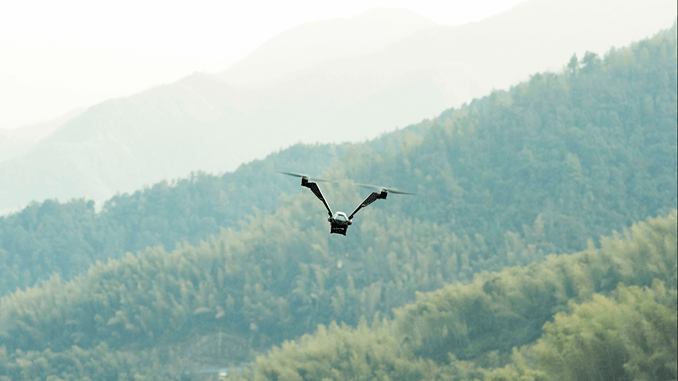 Flight time is a critical spec and ongoing pain point for drone enthusiasts. Compared to the industry standard flight time of 30 minutes or less, V-Coptr Falcon excels in longevity, offering 50 minutes of continuous flight. Due to an elegant V-shaped dual rotor design inspired by military grade models such as the V-22 Osprey, tilt-rotor technology, nonlinear dynamic modeling and control algorithms, the propulsion system of the V-Coptr design is notably more efficient than traditional quadcopters of the same size under the same payload. Designed with portability in mind, V-Coptr Falcon’s propeller arms pull back and fold into the body while the propellers tuck under for ease of transport.

V-Coptr Falcon features a three-axis mechanical gimbal for precise image quality and seamless video with a yaw control range of ±80 degrees. V-Coptr Falcon shoots 4K video at 30fps and 12-megapixel pictures. It boasts a 1/2.3 inch CMOS by Sony and a Qualcomm ISP. The patented blade design and precise configuration of V-shaped dual rotors combined with a slower rotation of the propellers allow Falcon to create lift with higher efficiency and a lower noise profile.

Utilizing Visual Inertial Odometry (VIO) and a front-facing stereo camera, the V-Coptr Falcon can map its surroundings, detect obstacles, and avoid collisions in realtime. Newly upgraded visual tracking algorithms can accurately and stably follow people or other moving objects. V-Coptr Falcon also has pre-programmed flight paths for cinematic shots at the touch of a button. Zero Zero is currently in the process of raising its Series C after having closed a $30 million Series B. On the heels of the new product launch, the fresh funds will be used to extend the applications of bicopter technology. Zero Zero also unveiled Project D, a concept drone weighing in at just 249g with 50 minutes of flight time.

“V-Coptr is the result of two and a half years of research and development, and we are very proud. We are more excited than ever to keep innovating and pushing the boundaries of both intelligence and flight,” says MQ Wang, CEO & Founder of Zero Zero Robotics. “Zero Zero looks forward to continuing to challenge expectations of what is possible with drones and expanding our offerings to different customer segments.”

V-Coptr Falcon is available for presale starting today with an early bird price of $699 through December 31, discounted from a retail price of $999. It can be ordered at Zero Zero’s website (zerozerorobotics.com) with a refundable $100 deposit and shipment will begin in February 2020.

Co-founded in 2014 by former Twitter and Facebook software engineer and Stanford Ph.D., MQ Wang, and Stanford Ph.D. Tony Zhang, Zero Zero Robotics is a forward-thinking robotics company pioneering the future of smart flying consumer robotics. The company brought the award-winning (Red Dot Design, iF Design) Hover Camera Passport to consumers in 2016 and partnered with Apple retail in 2017. The team is pushing the boundaries of applied AI and flight technology. Zero Zero Robotics has offices in Beijing, Hangzhou, Shenzhen and San Francisco.

Sentera and AB InBev Partner for Sustainability and Grower Empowerment

No Replies to "Zero Zero Announces The V-Coptr Falcon, Ushering In A New Chapter In Drone Technology"