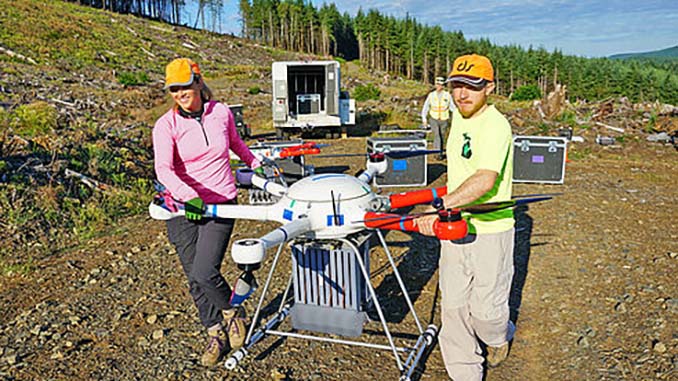 The privately held startup obtained an additional amendment to its already unprecedented FAA Part 333 exemption that enables them to operate their seed-planting drones Beyond Visual Line of Sight (BVLOS) in forested and post-fire areas.  This means the company can operate beyond a pilot’s view – a classification thus far unique to only DroneSeed and a first for a company in its industry.  BVLOS permits in general also rare – the last numbers released in 2018 show more than twelve hundred BVLOS exemption applications have been submitted to the FAA by commercial drone operators and 99% have failed to be approved.

The significance of DroneSeed’s approval is profound – it saves human lives and unlocks access of public lands that don’t have a road nearby for immediate post-fire replanting.  Until now the U.S. Forest Service and Bureau of Land Management (BLM) lacked an immediate solution to safely, quickly, and effectively replant in those areas.  Scorched timber that is left onsite can fall over and kill laborers manually replanting, and natural forest regeneration is in decline due to climate change, with 40% of post-fire Northwest forests at risk of state-shift to grassy scrublands.  DroneSeed can safely and efficiently replant seed vessels that boost survival rates immediately after a fire, deploying them with greater precision and efficacy by targeting areas called ‘microsites’ where regrowth has its best odds.

“In an age where wildfires are both more severe, yet the new normal, and natural forest regeneration is declining rapidly, we need better tools such as drone swarms to have a shot at keeping the forests we have in addition to planting more trees to mitigate the worst effects of climate change,” said Grant Canary, Founder and CEO of DroneSeed.

This is the third precedent-setting FAA announcement for the Seattle-based company – DroneSeed also earned the first and only approval by the FAA to operate heavy-lift drone swarms of up to five aircraft each carrying more than 57 lbs. — a measure which helped them secure a massive (yet-to-be-announced) post-fire restoration project, as well as post-fire forestry projects for The Nature Conservancy, Tribal entities and three of the five largest timber companies in the country.

DroneSeed has licenses in Idaho, Oregon and Washington and is actively pursuing the ability to operate in Arizona, California and Colorado.

DroneSeed is paid per acre as a service to restore forests and rangelands using drone swarms.  It currently operates with up to five aircraft simultaneously, each capable of delivering up to 57 lbs. per flight of payload. Payloads dropped are “pucks” containing seeds, fertilizers and other amendments designed to boost seed survival.  Because the company uses seeds, they can eliminate delays of 18-36 months waiting for seedlings to grow in a nursery to replant post-fire.  The company has been operating since 2016 under contracts with three of the five largest timber companies in the U.S., as well as nonprofits such as The Nature Conservancy and local and federal governments.

No Replies to "FAA Approves Rare Permit to Replant After Wildfires"