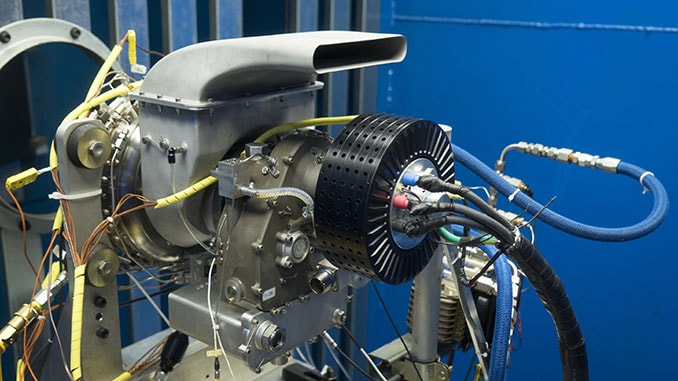 Kirk Warshaw, CEO of UAV Turbines, explains: “It is well-documented that the range of battery-powered electrical air vehicles is sharply restricted by the relatively low power density of currently available batteries. Simply adding more batteries will result in the aircraft becoming too heavy to fly with a practical payload. The solution is a hybrid system that will power the aircraft in flight with battery power providing a boost during critical stages such as take-off, hover, and landing. These capabilities are critical for meaningful real-world missions, like a payload weighing more than 10 pounds that needs to be delivered more than 5 miles away. UAVT’s Monarch microturbine HREX technology provides this important new capability.”

In UAV Turbines’ HREX system, the engine extracts energy from the fuel and uses it to power the propulsion motor directly, with any excess electric power used to top off the battery charge. This greatly increases range before the weight of the added fuel becomes uneconomical. There are many tradeoffs in optimizing power for any specific system; for example, some energy is lost in the extraction process, but as the fuel is consumed, the net weight of the aircraft drops. It is this flexibility that enables engine optimizations not otherwise possible with a single power source.

“If you’re flying more than about half an hour, you probably need a range extender,” added Fred Frigerio, Senior VP of Engineering at UAV Turbines. “The first step to extending flight is to add a small, efficient turbogenerator to the power mix. Let each power component do what it does best; batteries can release power at a very high rate so they are great for the burst of power needed during take-off, hover, and landing, while the turbine performs best when providing steady power for longer durations of operation. Importantly, the energy density of liquid fuel, for example jet fuel, is vastly greater than that of available batteries. A common rule of thumb is that liquid fuel contains at least 50x as much energy per weight as batteries. The battery is your sprinter, full of explosive power, while the turbogenerator is your marathoner, lean and efficient. The absolute gain in flight distance will be dependent upon numerous factors, but there is no doubt that there is a significant need for a reliable range extender application.”

To demonstrate HREX, UAVT has set up a system in its laboratory test cell using the same Monarch 5 turboprop engine that recently powered a Group 3 Tigershark aircraft. Converted to a turboshaft engine, it powers an off-the-shelf generator. The electrical output of the generator is used via a motor controller to power an electrical motor driving a propeller, as it would in an electrical propulsion airplane.

“The video shows the HREX system in operation, demonstrating its flexibility with major elements connected by cables that can be configured to fit most Group 3 and 4 airframes,” added Warshaw. “While this test system was assembled using heavy industrial motors and controllers, a purpose-designed system would be far lighter, hardened for aerospace environments, and optimized for specific military and commercial applications and missions. Increases in flight time will be at least 2 to 3x greater than a vehicle powered solely by batteries if the UAV is a clean-sheet design that contemplates from the outset the use of a UAV Turbines range extender.”

About UAV Turbines, Inc.
UAV Turbines is creating the world’s first reliable, lightweight and fuel-efficient microturbine engines to provide propulsion and power generation in small to medium-sized UAVs. The Company’s Monarch microturbine increases performance beyond what current engine systems permit. Designed by UAV Turbines’ team of world-class engineers and protected by multiple patents, Monarch runs on less-volatile heavy fuels than Avgas and provide abundant onboard electrical power. UAV Turbines’ first-of-its-kind engine is a reliable, quiet, cost-effective option for both the defense and commercial sectors. In 2018, the Company entered into a Technical Investment Agreement with the U.S. Military for the development of a more efficient propulsion system, the key advancement to the success of future UAV’s. Founded in 2014, privately owned UAV Turbines is headquartered in Miami, Florida.