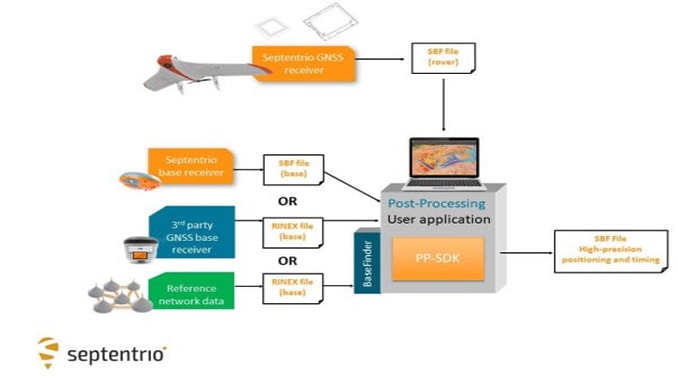 Septentrio Post-Processing Kinematic Software Gets A Boost With BaseFinder

Septentrio, a leading manufacturer of accurate and reliable GPS technology, has released a key upgrade for their GPS post-processing software. Both GeoTagZ and PP-SDK now feature BaseFinder, a tool that speeds up survey workflow by automatically finding reference data needed for augmenting GNSS* logs with sub-centimeter accuracy. BaseFinder accesses an online database of reference networks and extracts the most suitable corrections available. BaseFinder is available via an App or via an API and can be incorporated into any existing software.

*GNSS: Global Navigation Satellite System such as the American GPS, European Galileo, Russian GLONASS, and Chinese BeiDou. These satellite constellations broadcast positioning information to receivers which use it to calculate their absolute position.

Septentrio has two decades of experience delivering reliable and robust RTK and PPK sub-centimeter positioning to industrial applications. PPK is often used for ground surveys with aerial drones, allowing high precision georeferencing without the need for a real-time base station link or ground control points (GCPs).

“Surveying without a base station will allow users to reduce costs and set-up time. With this PPK upgrade we are improving the end-user experience as well as developer experience,” commented Danilo Sabbatini, Product Manager at Septentrio.

The new release of this GNSS post-processing software also includes two additional GNSS constellations: European Galileo and Chinese BeiDou. Having access to all the signals from all GNSS constellations improves reference network compatibility. It also improves positioning availability in difficult environments. This is particularly important when working in areas of low satellite visibility such as near tall structures or under foliage.