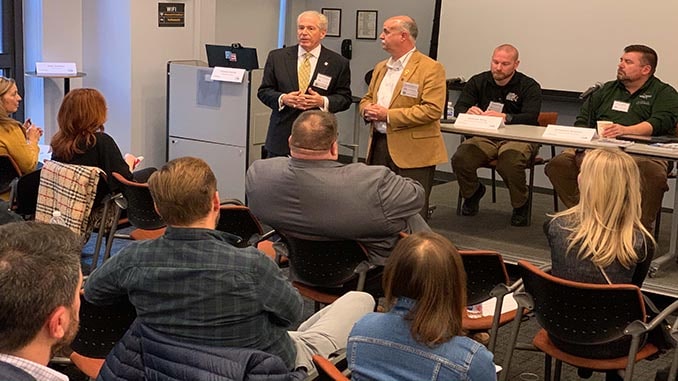 Announced at the Drone Journalism Leadership Summit held at the Craig Newmark Graduate School of Journalism at CUNY, the memorandum of understanding (MOU) outlines the key initiatives under which NPPA and DRONERESPONDERS will collaborate together.

“We are seeing both news media and public safety organizations rapidly adopting drones for use in their everyday operations,” says Mickey Osterreicher, General Counsel for NPPA.  “Our partnership with DRONERESPONDERS will focus on providing education for, and enhancing communication between, both groups to ensure a safe and productive environment for flight operations.”

At many large events, it is becoming more common to see public safety drones joined in the NAS by news media, attorneys, insurance companies, hobbyists, and others.  Osterreicher points to the increasingly crowded airspace bing occupied by these UAS operating at major incident scenes as presenting the type of dilemmas that NPPA and DRONERESPONDERS would like to deconflict in advance.

“It’s all about establishing communication protocols and ensuring that all remote pilots are operating from the same script with an extreme focus on safety,” says Charles Werner, retired Charlottesville, Virginia fire chief who is the director of the DRONERESPONDERS program.  “We believe NPPA represents an ideal partner for DRONERESPONDERS to work with in bridging the gap between public safety and news gathering operations.”

NPPA and DRONERESPONDERS had already been working together to promote drone safety and awareness, prior to the MOU.  Most recently, the two organizations combined forces for an FAA’s National Drone Safety Awareness Week event at Commercial UAV Expo Americas in Las Vegas.

“It’s really about building trust,” adds Osterreicher.  “Manned public safety aircraft pilots and news helicopter pilots know each other and communicate freely in the NAS over incident scenes.  We want to create the same environment for remote pilots operating drones.”

“At the end of the day, each side has a job they need to do,” says Werner.  “The most important thing is that the jobs get done safely and effectively.   That requires communication and cooperation.”

Since its founding in 1946, the National Press Photographers Association (NPPA) is the Voice of Visual Journalists. NPPA is a 501(c)(6) non-profit professional organization dedicated to the advancement of visual journalism, its creation, editing and distribution in all news media. NPPA encourages visual journalists to reflect the highest standards of quality and ethics in their professional performance, in their business practices and in their comportment. NPPA vigorously advocates for and protects the Constitutional rights of journalists as well as freedom of the press and speech in all its forms, especially as it relates to visual journalism. Its members include still and television photographers, editors, students, and representatives of businesses serving the visual journalism community. NPPA has been an strong advocate for the use of drones for newsgathering and for improved communication and cooperation between the media, law enforcement and first-responders.