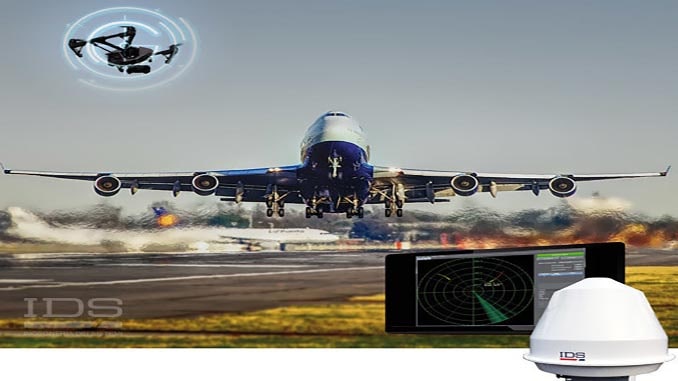 In response to recent threats of rogue and errant drones launched against airports and other critical facilities, infrastructure and events, 34 North Drones has partnered with IDS North America to offer and install the NO-DRONE radar counter drone system for all government and civilian clients in need of protection.

The NO-DRONE radar detection system evolved from a proven and existing military battlefield solution originally tuned to recognize small objects such as incoming mortar, artillery and rocket fire with the ability to detect, locate and track both fixed wing and rotorcraft UAVs, Class I category (mini or small) and larger. The system provides full 360° coverage, day or night, as well as in adverse weather conditions with the ability to detect dozens and, depending on configuration, hundreds of targets simultaneously.

The system can be upgraded with an optional “slew to cue” EO/IR turret and an RF detector which can be fully integrated into the system to provide substantive enhancements to drone tracking and identification capabilities.

The military, governments and certain federal agencies are authorized to use various optional drone mitigation technologies that can be integrated with the NO-DRONE system such as EMP, powerful multiband jamming, GPS spoofing or live fire systems to disable, redirect or destroy threats.

Airports are known as extraordinarily difficult environments in which to integrate and operate electronic equipment without interference with critical aircraft guidance and navigation systems. The NO-DRONE counter drone radar system utilizes a suite of EMC/EMI simulation tools for predictive assessment of possible interference between various radiating and receiving elements around the airport which models any potential interference with and from any existing NAVAIDS and COMMS equipment. These specialized tools promote safety of operations and maximize radar coverage. Comprehensive on-site technical support and training is provided to ensure successful installation and seamless ongoing operations.

The NO-DRONE system will also be available for rental with trained operators in a mobile platform for temporary use at facilities and events across the USA, and later, internationally for drone mitigation where permanent installation is not practical or needed. This includes VIP protection, outdoor concerts, sporting events, rallies and political events or any large gatherings of persons which are potentially high-risk environments. In partnership with local authorities, FBI and DHS, a protective bubble can be established around locations to mitigate the unauthorized entry by aerial threats.

Extensive demonstrations and tests at the China Lake Naval Air Weapon Station and internationally have been conducted. The system has been installed at various airports and prisons and has been used on protective details for the Pope. The NO-DRONE system is now being released through 34 North Drones for all government and civilian protection applications.