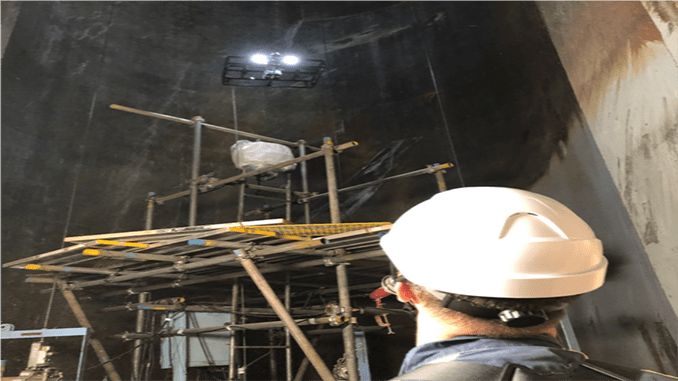 A major component of the chimney inspection was to measure the thickness of the steel plate in a chimney windshield or flue. Conventionally, this would have been done manually by shutting down the facilities, putting up temporary scaffolding, and having human inspectors climb dizzying heights – in this case, 160 meters.

But by using Terra Inspectioneering’s UT drone, the power company was able to eliminate the need for scaffolding assembly and removal and shorten the inspection time greatly. Leveraging unmanned robotics not only allowed the power company to save on labor costs but the company also managed to curtail losses that it would have incurred by facility shutdown for extended periods. The data acquired in the inspection enabled further reduction by allowing the company to formulate comprehensive chimney maintenance plans.

Terra Inspectioneering’s UT drone for chimney inspection weighs just 2.5 kg. It is equipped with a Dutch patented contact catalyst (co-plant) dispenser, which allows the co-plant to be supplied to the probe even during flight, enabling efficient inspection. In addition, three high-precision cameras empower ground inspectors to check the UT graph as well as the images from the drone in real time.