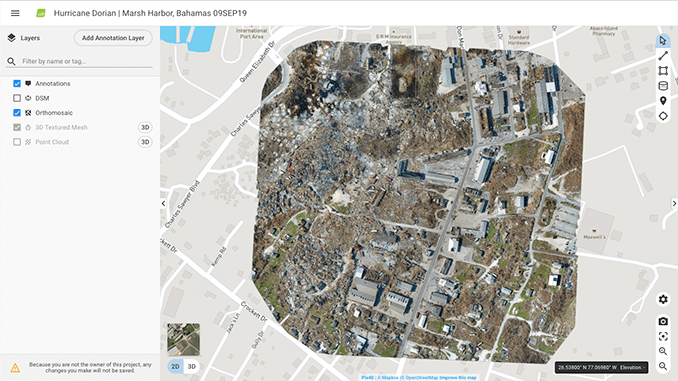 Pix4Dreact allows users to create 2D maps from aerial imagery in a fraction of the time needed by other mapping programs.  This provides first responders and disaster response professionals with a much-needed edge when lives are on the line and time is of the essence.

“We needed a solution that would allow us to rapidly process imagery on-scene under severe conditions with no available power source or mobile Internet connection,” says Christopher Todd who serves as the executive director of AIRT as well as a command staff member of the South Florida Region 7 All-Hazards Incident Management Team (FL-7 AHIMT).  “Pix4Dreact worked perfectly.  This software will help transform the workflow for disaster response teams around the world who are operating drones during emergencies.”

Unlike traditional mapping programs which typically require Internet access and can take several hours to render a map, Pix4D can rapidly and accurately process drone imagery directly on-scene without mobile connectivity.  Todd believes this will be a game changer for first responders and emergency services professionals who are operating drones.

“With the old workflow we needed to take the data off the drone, transport it back to a command post or emergency operations center, process the data – which might take several hours, and then push the end product back out to the field for use by response teams,” says Todd.  “Pix4Dreact allows responders to quickly process the data while still on-scene so it can be used much more quickly to help assess damage, protect property, and save lives.”

With a workflow that is intuitive and simple to use, Pix4Dreact’s fast-stitching technology creates accurate 2D orthomosaic maps by combining a large number of aerial nadir images from UAS.  Users can quickly measure, analyze, and mark these files, which are light enough to be easily sent via email as needed.

“We are excited that Pix4Dreact is now available for use by public safety and emergency services professionals around the world,” said Lorenzo Martelletti, Sales & Marketing Director, Pix4D.  “We will continue to work with first responders and disaster professionals to help make the product even stronger.”

A webinar highlighting Pix4Dreact and AIRT’s use of the software in their response to the Bahamas is scheduled for early December.  Pre-registration for the webinar is now open at https://forms.gle/R9FK39nXcRKoe7jd8.

For more information, to purchase or get a trial of Pix4Dreact, please visit: www.pix4d.com/react.

DJI Pioneers Fight Against Malaria In Africa With Spray Drones