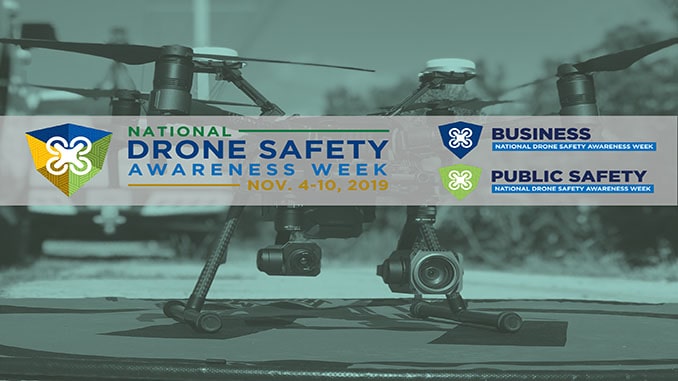 Leading organizations within the unmanned aircraft systems (UAS) sector are teaming together on Tuesday, October 29 to help kick-off National Drone Safety Awareness Week, a week-long series of events coordinated by the Federal Aviation Administration (FAA) and the U.S. Department of Transportation designed to help educate the public about drone safety and bring awareness of the many benefits of commercial and public safety drone operations.

The kickoff event, held in coordination with Commercial UAV Expo Americas and hosted by Sundance Media Group, DRONERESPONDERS, the National Press Photographers Association (NPPA), and KSNV NBC 3 News Las Vegas, is based on the theme “Drones are Now” and will feature a drone-based crime scene investigation simulation combined with a news gathering drone flight – with all aircraft operating simultaneously, and safely in common airspace to achieve their specific missions.

“What better way to kick-off the FAA’s National Drone Safety Week than by demonstrating how public safety and commercial drone operations can safely work alongside each other in close proximity,” said Chief Charles Werner (ret.), Director of DRONERESPONDERS.  “This type of operation will be coming to cities and towns around the world in the very near future.”

“With the increased use of drones by both public safety agencies and the media, remote pilots will need to understand how to operate these aircraft safely and cooperatively with one another at incident scenes, says Osterreicher.  “This demonstration will mark the start of an evolving conversation, with safety and awareness being the overarching premise.”

The kick-off demonstration, which will be held from 5:30 to 8:30 pm, will feature a night forensic scene aerial capture workflow demonstration by Sundance Media Group, FoxFury and Pix4D highlighting how two different drones and related technology can be used to capture forensic evidence for law enforcement use. Halfway through the aerial collection, a news crew will launch an additional drone simulating a news gathering mission of the incident.  Together, three drones will operate together safely in relatively confined airspace as they each accomplish their assigned objectives.

Attendees will be able to watch the dual operations live on site.  A video of the demonstration will also be released the following week in conjunction with National Drone Safety Awareness Week.

“This event will demonstrate how drones can be used safely and effectively – even at night – in everyday operations for both public safety and commercial operators,” said Lisa Murray, Group Director for Commercial UAV Expo Americas. “We are thrilled to help unite these incredible partners to showcase the exciting potential of commercial drone technology and drones for good in conjunction with National Drone Safety Awareness Week.”

Since its founding in 1946, the National Press Photographers Association (NPPA) is the Voice of Visual Journalists. NPPA is a 501(c)(6) non-profit professional organization dedicated to the advancement of visual journalism, its creation, editing and distribution in all news media. NPPA encourages visual journalists to reflect the highest standards of quality and ethics in their professional performance, in their business practices and in their comportment. NPPA vigorously advocates for and protects the Constitutional rights of journalists as well as freedom of the press and speech in all its forms, especially as it relates to visual journalism. Its members include still and television photographers, editors, students, and representatives of businesses serving the visual journalism community. NPPA has been an strong advocate for the use of drones for newsgathering and for improved communication and cooperation between the media, law enforcement and first-responders.